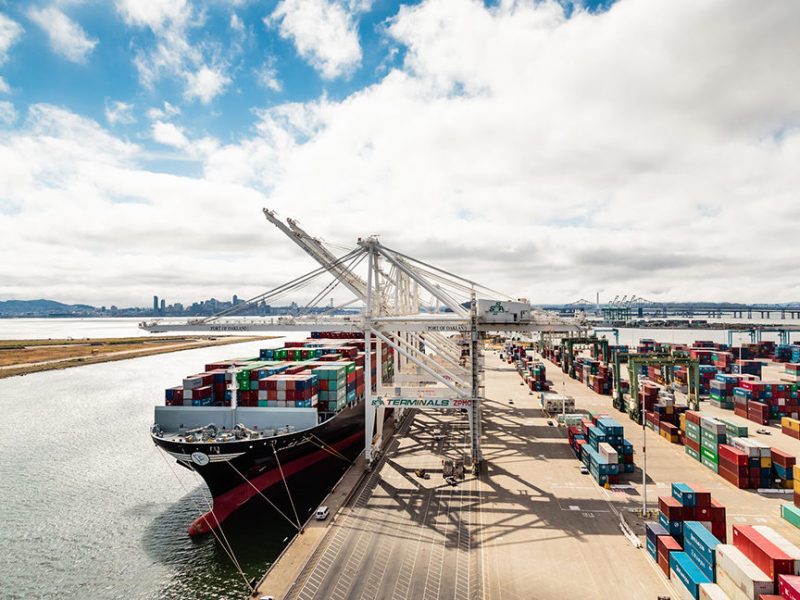 Los Angeles port officials see progress in reducing their bottleneck of cargo ships. Sail north to Oakland, though, and the line is even longer and there’s talk of the congestion lasting through the summer.

As of Friday, 25 container carriers were waiting to enter the Port of Oakland at anchor in San Francisco Bay and in a holding area offshore, up from 21 at the beginning of the week and little changed from a month earlier, a spokesman said. Outside the adjacent ports of Los Angeles and Long Beach, the queue was 21 ships long, also about the same as in mid-March.

When the L.A.-Long Beach backlog peaked at around 40 ships in early February, some of them sought quicker options along the West Coast. France’s CMA CGM SA, the world’s third-biggest container line, made Oakland its first stop on a service from China. The ports of Seattle and Tacoma beckoned ships to visit their available berths.

Two months later, dozens still arrive each week from Asia only to find American ports have few ways to relieve the pressure.

“It is very much like a balloon: You squeeze one end, the other expands, but the balloon does not get any smaller,” said Andy Lane, vice president of advisory services at Copenhagen-based Sea-Intelligence.

Choke on the Water

At the epicenter of global trade’s sharp recovery in the past year, California’s ports are hardly alone in dealing with unprecedented volume heading into the second year of the Covid-19 pandemic.

In Singapore, a busy transit hub for containers, estimated throughput reached the highest level on record last month. On the U.S. East Coast, the Port of Savannah in Georgia said it’s on track to exceed a record 5 million 20-foot container units in its fiscal year ending in June.

As ships stacked high with steel boxes keep coming, the foundation for friction at ports was laid well before the public health crisis. Many gateways of seaborne trade aren’t designed for flexibility, having neither sufficient labor nor the infrastructure — from costly cranes to extra land for container storage — to handle unnatural surges in volume.

“When 10% or more demand appears, chronic congestion is the only outcome,” Lane said.

According to Hong Kong-based Freightos, an online shipping marketplace, longer waits to offload in Southern California over the past six months forced the shippers of cargo to look for alternatives elsewhere on the West Coast and on the East Coast.

Three main groups are losing out:

With industry capacity maxed out, the question now is whether there’s any stretch left. Many of the nearly 400 ships caught up in the closure of the Suez Canal in late March arrived this past week at their destinations in Europe, Asia and the east coast of North America. Schedules were thrown off, leaving ports guessing as to how to handle the unpredictable flow of vessels.

European ports in the crosshairs of Suez fallout are bracing for possibly another week of uneven traffic. According to data from Athens-based MarineTraffic, a global ship tracking platform, the ports of Hamburg, Rotterdam, Valencia and Antwerp now typically deal with more than 200 ocean-going container carriers a week.

For the next four weeks at the U.K. port of Felixstowe, they’re extending Sunday hours for pickup and deliveries to help with the influx. Hamburg on Friday said it expects to manage through “only a slight increase” in arrivals. Rotterdam posted an online schedule to monitor post-Suez congestion through May 9.

Their goal is to accommodate vessels like the Cosco Shipping Scorpio, a large container vessel that spent five days idled south of the canal on a journey from Southeast Asia, according to tracking data, and has been anchored outside the Dutch port since last Tuesday. Rotterdam’s schedule says it’s supposed to enter the port tomorrow.

Such delays may ripple beyond Europe. While the Port of New Orleans didn’t have any direct impact from the canal blockage, “this event has further disrupted global supply chains and there will be indirect impacts of backlogs in foreign markets that will cause tightening of capacity on vessels for shippers,” spokeswoman Jessica Ragusa said.

In Oakland, which handled a record number of inbound containers during the usually quiet month of March, they’re seeing sustained demand for imported consumer goods. That means little respite in ship delays between the two peak seasons for ocean freight — just before Chinese New Year, and the late-summer restocking of inventories before the holiday shopping season.

“We don’t think there will be a lull,” Oakland port spokesman Robert Bernardo said. 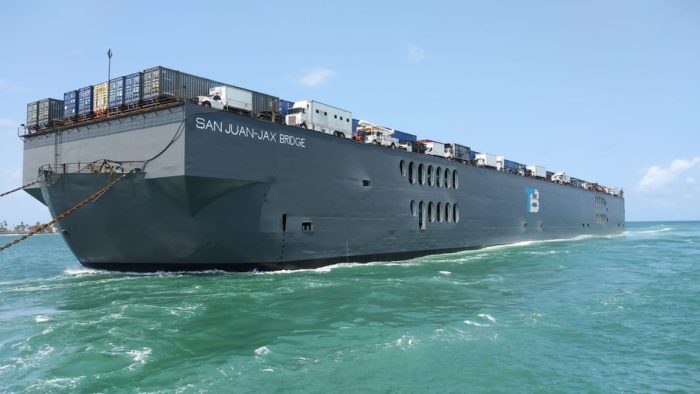 JACKSONVILLE, Fla., May 7, 2021 /PRNewswire/ — Trailer Bridge Inc., headquartered in Jacksonville, FL., announced today it has signed a 20-year lease agreement with Puerto Rico Ports Authority for the Army Terminal. This is the company’s first long-term agreement with the port since its inception, signaling Trailer Bridge’s continued commitment to providing weekly sailings to support… Read More 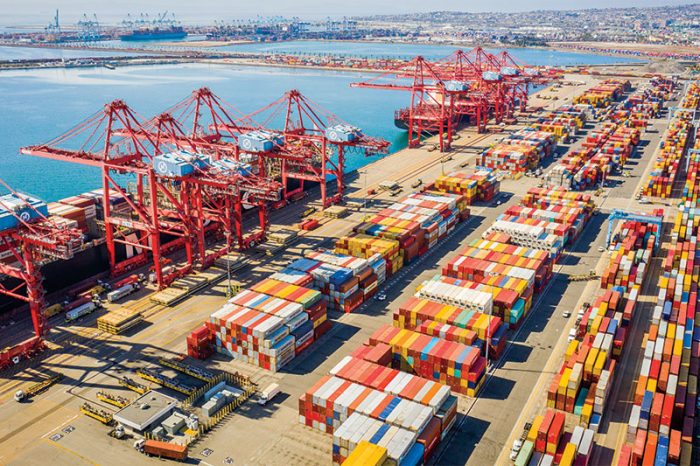 The U.S. container seaport sector endured a series of disruptions caused by the pandemic, but still ended up handling more containers than ever. Meanwhile, the temporary blockage of the Suez Canal complicated an ongoing congestion crisis. The rapid re-emergence of China from initial lockdowns combined with a surge in consumer durables demand and transport of… Read More 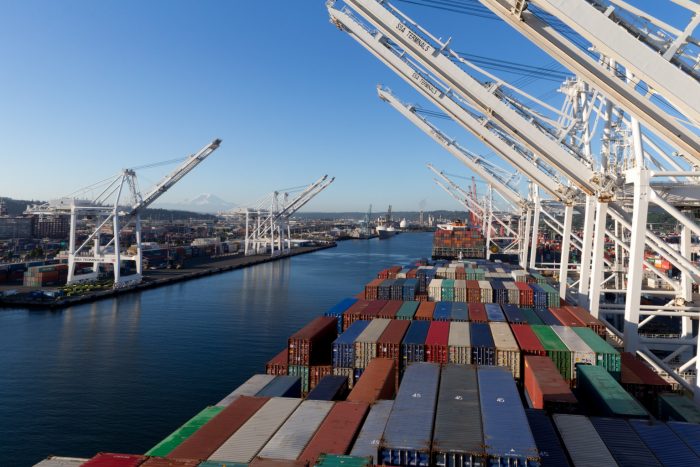 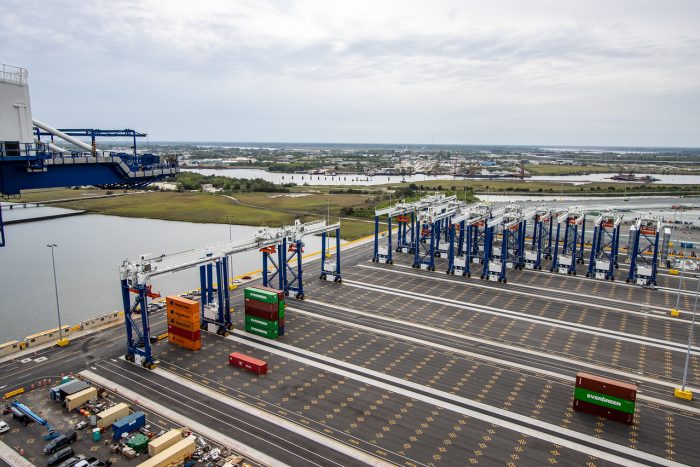 Leatherman Terminal forced to divert 2 lines back to Wando Welch

The S.C. Ports Authority has shifted two containerships intended to call on the Hugh K. Leatherman Terminal back to Wando Welch Terminal as shipping companies look to stay out of the fray cause by a union lawsuit, the Port of Charleston said yesterday in a statement. In a months-long battle to ascertain HLT jobs that they believe should… Read More 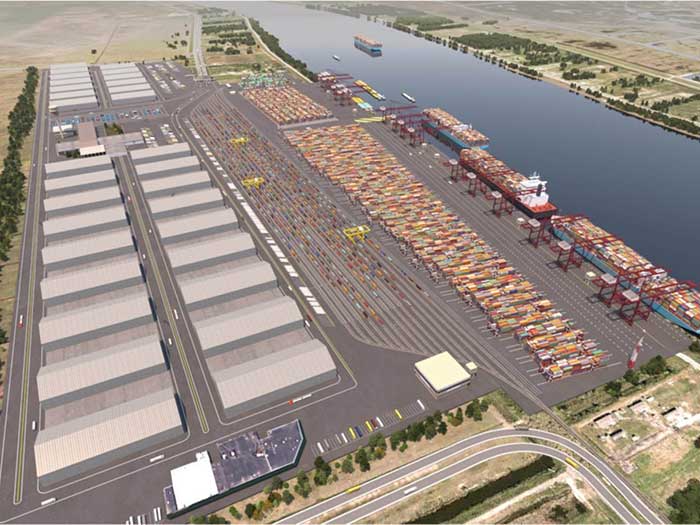