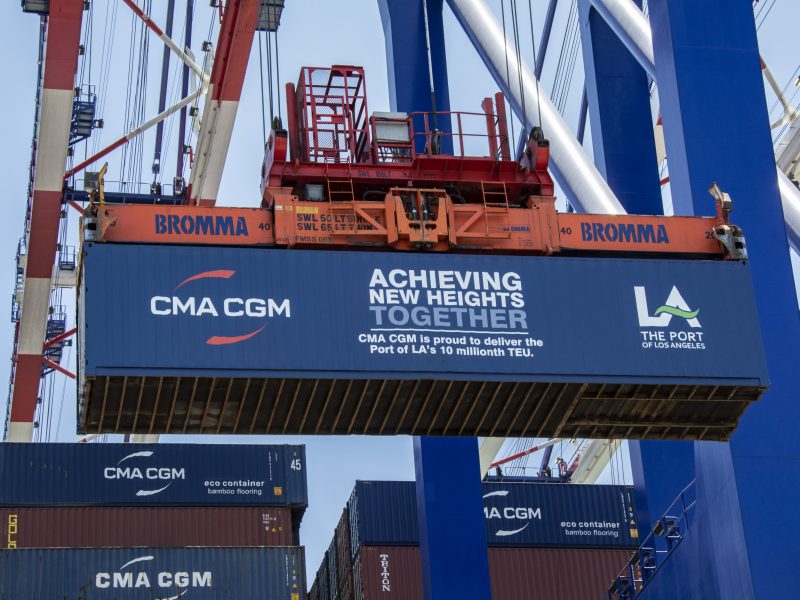 The Port of Los Angeles became the first port in the Western Hemisphere to process 10 million container units in a 12-month period. (Photo: Business Wire)

“The Port is the beating heart of our economy, the backbone of our region’s prosperity, and the crossroads that makes Los Angeles a true gateway to the rest of the world,” said Mayor Eric Garcetti. “Reaching this remarkable milestone is a reflection of its role as a critical engine of the global supply chain — and a testament to our unmatched port infrastructure and highly-skilled workforce.”

“Stacked end-to-end, 10 million containers would circle the world one and a half times,” said Los Angeles Board of Harbor Commissioners President Jaime Lee. “It’s a lot of cargo to handle by any measure. We are deeply grateful to the longshore workers, truckers, terminal operators, shipping line partners and all of the stakeholders that have made this remarkable achievement possible, particularly in the face of an unprecedented pandemic.”

“Each one of these 10 million boxes represents jobs and economic prosperity for not only the Harbor Area but the entire Southern California region,” said Los Angeles City Councilman Joe Buscaino, whose 15th District includes the Port. “I salute all the waterfront workers who work tirelessly to move all this cargo, particularly the men and women of the International Longshore and Warehouse Union.”

When the Port of Los Angeles closes its 2020-2021 Fiscal Year books on June 30, it is expected to have processed more than 10.8 million Twenty-Foot Equivalent Units (TEUs), a standardized maritime industry measurement used when counting cargo containers of varying lengths. A pandemic-induced consumer buying surge that began last summer, along with restocking of retailer shelves and e-commerce warehouses across the country have fueled the dramatic rise in imports.

Over the past 12 months, Port terminals have worked an average of 15 container ships each day, up from a pre-pandemic average of 10 ships a day, representing a significant increase in productivity.

“What we’ve collectively achieved today is a result of the incredibly hard work and perseverance of many,” said Port Executive Director Gene Seroka. “With our sustained focus on supply chain digitalization, infrastructure investments and strong business relationships, we have the opportunity to build on this historic milestone. Special thanks to our long-time partners, the CMA CGM Group, who share our vision for success both today and in the future.”

Ed Aldridge, President of CMA CGM and APL North America, stated, “As the Port of Los Angeles’ largest ocean carrier, the CMA CGM Group ships thousands of containers to and from California every day. But today’s historic TEU — number 10 million for the Port — carries more than just cargo, but hope. It shows that, as the pandemic subsides in the United States, the American economy is roaring back to life. CMA CGM is committed to delivering the essentials that keep the country moving as well as proposing agile logistics solutions to its customers, and we look forward to continuing to work with the Port of Los Angeles to deliver the goods Americans need to return to normal.”

During the COVID-19 pandemic, the Port of Los Angeles remained open every day, serving as a vital link and economic engine for the region and nation. The Port remained a steady source of high-quality jobs — from the docks to all nodes of the supply chain — despite the challenges presented by COVID-19 emergency orders and widespread economic uncertainties. Last month, Seroka met with the membership of International Longshore and Warehouse Union Locals 13, 63 and 94 to thank the dockworkers, clerks and foremen for their commitment to processing the nation’s essential cargo throughout the challenges of the pandemic.

“This 10 million cargo milestone would not have been possible without the dedication and commitment of the men and women of the ILWU,” said Ramon Ponce de Leon, President of ILWU Local 13. “Even in the midst of a pandemic, they worked diligently day in and day out, turned record amounts of cargo, and helped assure that much-needed goods were delivered to the American people. I salute to all my fellow brothers and sisters for their part in helping shatter all previous cargo records.”

Longshore labor shifts are up nearly 20% in 2021 compared to the average weekly shift count over the past four years.

The Port of Los Angeles has ranked as the number one container port in the United States each year since 2000. In 2020, the Port moved 9.2 million TEUs, the fourth highest-volume year in the Port’s history. The Port’s previous highest annual container volume on record was in 2018, moving 9.5 million TEUs.

Led by Rodolphe Saadé, the CMA CGM Group is a world leader in shipping and logistics. Its 561 vessels serve more than 420 ports around the world, on all five continents. In 2020, they transported nearly 21 million TEU (twenty-foot equivalent units) containers. With CEVA Logistics, a world leader in logistics services, CMA CGM handles 400,000 tons of airfreight and 2.8 million tons of inland freight every year. CMA CGM is constantly innovating to offer customers new maritime, inland and logistics solutions. Present on every continent and in 160 countries through its network of more than 400 offices and 750 warehouses, the Group employs more than 110,000 people worldwide, of which 2,400 are in Marseille where its head office is located.