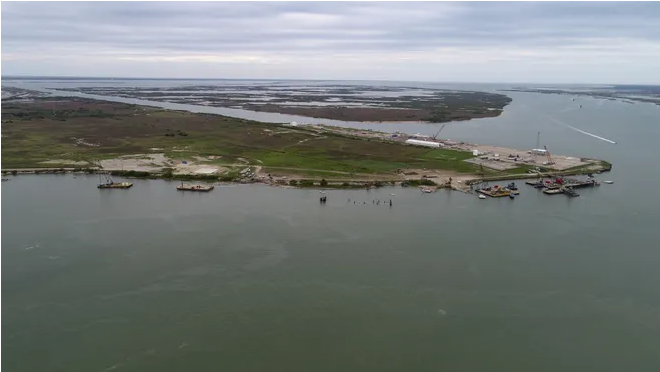 The Port of Corpus Christi has proposed a multi-billion dollar project for an oil terminal on Harbor Island. Courtnery Sacco/Caller-Times

The company that planned to construct a crude oil export terminal on Harbor Island has lost its lease.

“The port thanks Lone Star Ports for the investments they bring to our community and remains dedicated to the development of a VLCC loading facility on Harbor Island,” wrote a port authority spokeswoman in an email to the Caller-Times. “The port is committed to its pursuit of infrastructure projects as we continue to serve the needs of all port customers and stakeholders, all of whom have made the Port of Corpus Christi the leading energy export gateway in the nation.”

A section of the lease agreement was cited as reason for the termination, but no further discussion followed the commission’s decision.

The item had been included among several others slated for what became an hourslong executive session preceding the vote.

Representatives of Lone Star Ports LLC could not immediately be reached for comment Tuesday afternoon.

In 2019, the port had authorized a 50-year lease with joint venture Lone Star Ports LLC and The Carlyle Group for a marine storage terminal. At the time, it had been planned that the port would handle the design and construction of two docks, with the joint venture managing the build of storage infrastructure and pipelines.

The Carlyle Group later withdrew, but Lone Star Ports pledged to continue work on the project.

It had been estimated the development could bring in an additional $2 billion to $4 billion in port authority revenue over the span of the lease agreement. Expanding capacity is necessary to support new growth that would benefit Coastal Bend-area employment and tax base, port officials have said.

The proposed export terminal has continued to be met with significant opposition by environmentalists and some of Port Aransas’ residents, who have raised questions about the development’s potential impacts on the ecosystem, recreation and nature tourism, among other concerns.

James King, president of the Port Aransas Conservancy, said Tuesday afternoon that the commission’s vote was exciting but surprised him.

There should be more information communicated on why the lease was terminated, he said, but described the commission’s vote as “a great first step.”

“I’m hoping maybe this is the beginning of the understanding that Harbor Island is not the right place for this kind of stuff,” King said.