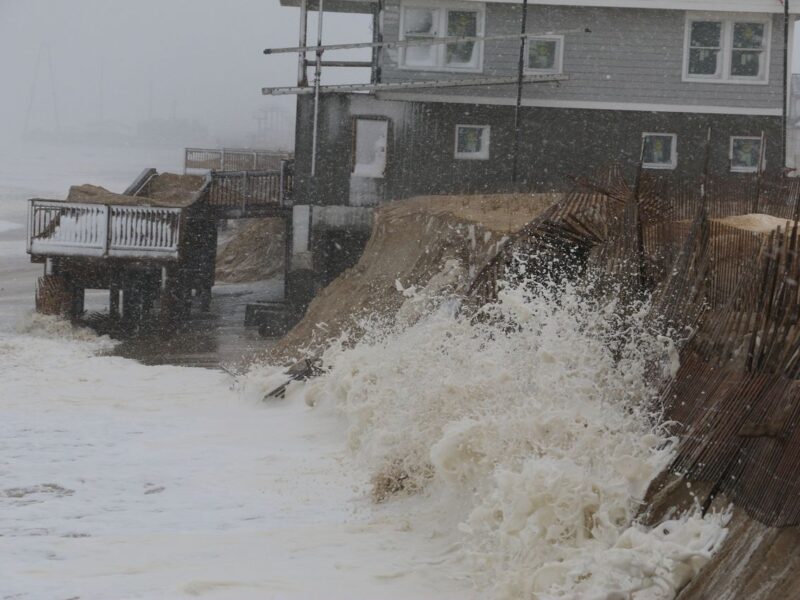 The dictionary defines “resilience” as “the capacity to recover quickly from difficulties.”

That sounds pretty straightforward. But our friends at the Sierra Club employ the term to describe actions that would lessen the capacity to recover quickly from difficulties.

The first such reference came from that cold snap in Texas that caused all those power outages. It affected all sources of electrical generation, but the head of the Texas chapter of the Sierra Club was quoted as saying he wants to phase out conventional power sources so the state can “be more resilient” in a future crisis.

The dictionary disagrees. The way to become more resilient is to have more options, not fewer.

The same goes for sand. The more sand a beach has, the more resilient that beach is.

The cold spell in Texas is dominating the news, but there has been a weather pattern at the Jersey Shore that has created a problem with resiliency. A recent spate of nor’easters has stripped sand from the beaches in nine locations.

Shore mayors are calling for the Army Corps of Engineers to pump more sand onto beaches that were replenished after Hurricane Sandy but eroded in a recent spate of ocean storms.

The Sierra Club opposes any more sand replenishment, again on the grounds of resilience.

“In order to protect our coast and homes from storms and sea level rise, New Jersey needs to implement a holistic approach,” the club said in a September press release opposing a replenishment project in Monmouth County. “Unfortunately, the DEP has been dragging its feet on any action when it comes to resiliency and dealing with sea level rise and climate impacts.”

“I don’t agree with the Sierra Club that we should just back off and let nature take its course,” Hill told me. “People have invested in that area and in reality it’s a cheap expenditure compared to the return.”

“What are you gonna do?” asks Chankalian. “Back off and let the entire barrier island go back to the bayside?”

In the case of Ortley Beach it’s on the spot of the old Cranberry Inlet, which closed a couple of centuries ago but keeps wanting to come back. But as we saw in Sandy, any breaches on the oceanfront lead to catastrophic flooding inland. That’s why the Army Corps built an extensive dune network running from Point Pleasant Beach to Seaside Park.

“The good news is the dunes did what they’re supposed to do,” said Chankalian.

Even as they eroded a bit, the dunes protected the property behind them. That’s the point of having a dune system, said Stewart Farrell, who is a professor at the Coastal Research Center of Stockton State University.

When I asked him about the Sierra Club’s opposition to beach replenishment, he replied, “I won’t say it’s nonsense talk but it doesn’t make a lot of sense. Not putting the sand there means that what happened in Sandy would happen again.”

Then there’s the contention from the Sierra Club that the state should buy up beachfront properties, which can cost as much as $5 million each.

“What are you gonna use, Bitcoin?” Farrell joked. (Acquiring beachront property is a great idea, but just one oceanfront lot, the one occupied by the Surf Club before it was destroyed in Sandy, could cost the township upwards of $8 million.)

But the most nonsensical attack on the sand replenishment, he said, is the argument that sand “will just be washed out into sea,” as the press release states,

“It doesn’t go out to sea. It goes north and south,” he said.

In the case of Bay Head, most of the sand migrated south to the Mantoloking beaches, he said.

Anyone who visits the ocean, which I do almost daily, can easily observe that the sand movement is seasonal. A lot of that sand will drift back by summer. Beachgoers will barely notice there’s been a problem. Farrell had a colorful way of explaining that movement.

“If I painted the Bay Head sand green, we’d have green sand in Mantoloking,” he said.

And when it comes to resilience, he said, the lesson of the recent storms is “We had zero damage. That was resilience.”

It certainly looks that way to me, and I saw up close what happens when the beaches don’t have sufficient sand.

When I walked down the beach the morning after Hurricane Sandy, I soon came across a new inlet that the storm had formed when the ocean broke through in Mantoloking.

Hundreds of houses were gone, many without a trace.

Maybe in the high Sierras they call that resilience.

But here in Jersey we’ll stick with the dictionary definition.

ALSO – HOUSTON, YOU HAVE A PROBLEM:

In this article about the roots of the power shortage we come across one very obvious problem:

“Cyrus Reed is the interim director of the Sierra Club Lone Star Chapter, and he sits on ERCOT’s reliability operations subcommittee.”

ERCOT is the Electric Reliability Committee of Texas. The way to achieve reliability – or resiliency if you prefer – is to have as many sources of power as possible. But the Sierra Club is committed to eliminating the most reliable forms of energy transmission, fossil fuels and nuclear power.

It’s a good thing they didn’t get their way in Texas. According to the federal Energy Information Administration, renewables make up just 21 percent of the state’s electrical generation. But they were responsible for about 38% of the outages.

Meanwhile the Biden administration had to resort to sending Texas generators powered by oil.

Now imagine the entire state had to rely on renewables. There would be a crisis every time the wind died down at night. Germany announced a desire to get off nuclear and fossil fuels, but resorted to burning lots of coal in a recent cold snap.

That should tell you what’s really going on here with the radical environmentalists. They claim they want to use renewables to meet consumer demand. But they oppose the construction of infrastructure needed to get that electricity to consumers.

Here’s an excellent piece by Alex Berezow that exposes the enviros’ fake concern for the consumer.