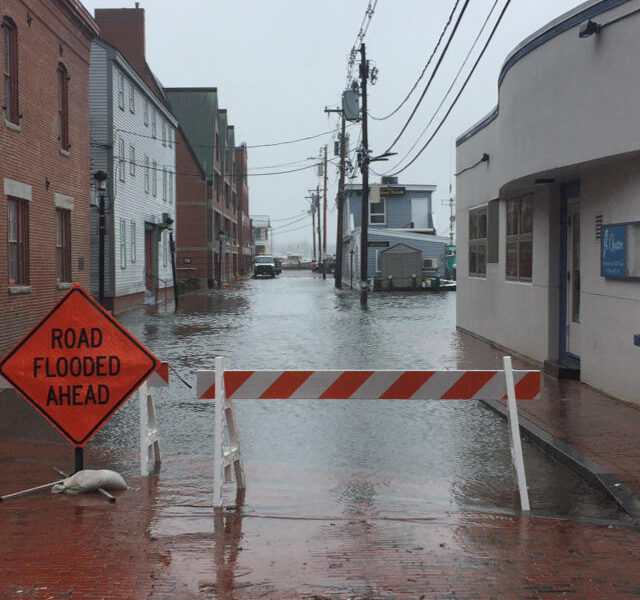 Sea level is expected to rise up to 3 feet by 2050, putting many streets and buildings in downtown Portland in jeopardy. That is why Casco Baykeeper Ivy Frignoca is suggesting communities use scientific projections to reframe their land use and building codes. Contributed / Friends of Casco Bay Volunteer Water Reporter Rick Frantz

Casco Baykeeper Ivy Frignoca and marine geologist Peter Slovinsky will hold a public conversation on how coastal communities can be more resilient to climate change.

PORTLAND — The state is taking steps to fight the impact of climate change, but regardless of the measures put in place, the sea level is going to continue to rise, storms are going to intensify and coastal areas are going to be more susceptible to flooding, according to the baykeeper for Friends of Casco Bay.

“In some ways we are too late,” said Ivy Frignoca, who also is a member of Maine Climate Council’s Coastal and Marine working group. “What we have to do now is help solve some of the harm we have already done, the consequences and prepare for the future.”

Frignoca and Peter Slovinsky, a marine geologist with the Maine Geology Survey, will lead a public conversation, “Sea level, storms, and surges, oh my!,” on March 3 on the science behind climate change and how Maine’s coastal communities can become more resilient to it.

Sea levels along Maine’s coast, according to the Maine Climate Council, have risen a tenth of an inch a year over the last few decades; half of the sea level rise in Maine over the last century has occurred in the last 30 years. The Maine Geological Survey’s Sea Level Rise Ticker reports Portland had its second highest January water level since 1912.

That is expected to continue and it is anticipated sea levels could continue to rise by 1-3 feet by 2050.

According to a recent report from the Maine Climate Council, a 1.6-foot sea-level rise could submerge 67% of Maine’s coastal sand dunes and reduce beach area by 43%. In addition to the impact on tourism, the rise could disrupt habitats for species such as the piping plover and least terns, said Slovinsky, a member of Maine Climate Council’s science and technical committee. Climate change has increased the acidity of Portland harbor, displaced cold water species such as lobster and made it more difficult for shellfish to thrive. Michael Kelley / The Forecaster

Greater Portland Landmarks indicates communities such as Higgins Beach, Pine Point, Prouts Neck in Scarborough; Ferry Village in South Portland; and Bayside, Stroudwater and the waterfront in Portland will be most impacted by sea level rise or storm surge.

Slovinsky said other low-lying areas, such as Portland’s Marginal Way, Commercial Street and East Bayside are also at risk, as are 10 wastewater treatment plants, including facilities in Portland and South Portland, that are in the 100-year flood plain. A sea level rise of just 1.5 feet would mean “at high tide water would be lapping at critical infrastructure.”

Portland has seen an average of four hours of flooding annually since 1912, Slovinsky said. Over the last decade that has increased to 14 hours a year, and with just a 1-foot increase in sea level, that number could jump to 140-210 hours of flooding. According to the Climate Council’s report, Maine’s annual temperature has risen by 3.2 degrees since 1895 and the state may warm by an additional 2-4 degrees by 2050 and up to 10 degrees by 2100. The warmer weather has led to Maine becoming wetter, with statewide precipitation increasing by 6 inches since 1895 and heavy storms of 2-4 inches of precipitation much more frequent.

There are things that residents and communities can do to better position their properties for climate change and sea level rise. This month, Slovinsky updated the Maine Coastal Property Owner’s Guide to Erosion, Flooding, and Other Hazards. In 2017, the Maine Coastal Program at the Department of Agriculture, Conservation and Forestry created a Maine Flood Resilience Checklist with additional recommendations how coastal communities can manage flood hazards and increase resiliency.

Frignoca said it is important for communities to take some of the scientific projections and incorporate them into land use, how development is sited and how stormwater is handled. Existing laws, she said, are “pretty static.”

“What we need is something much more dynamic because conditions are changing and they will continue to change,” she said. “There needs to be a major rethinking of how we manage and protect our coastal resources.”

Slovinsky said Portland and South Portland’s joint One Climate Future plan have recommendations and actions that are “very transferable to other communities and even other states.”