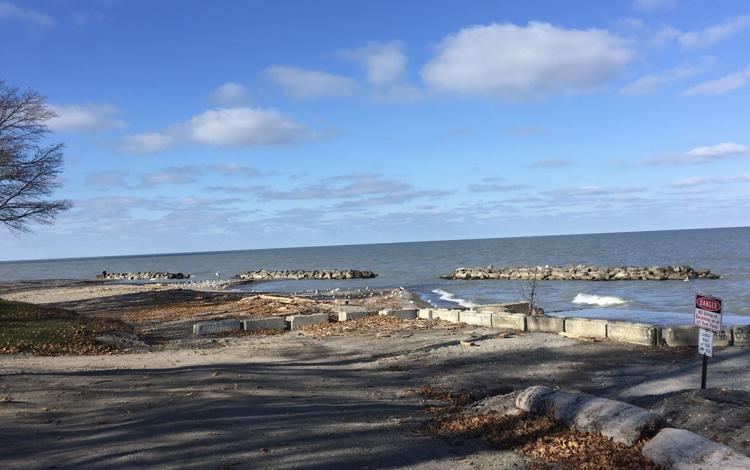 Madison Township Park's three breakwaters appear in the distance in this photo taken on Nov. 12. A contractor hired by the township just completed an annual project that involves excavating sand from one area of the park's shoreline and moving it to a point east of the breakwaters and boat ramps. The sand is then dumped back into Lake Erie. The project is done each year to fulfill an agreement between the township and U.S. Army Corps of Engineers. Bill DeBus - The News-Herald

Madison Township has fulfilled a yearly obligation to relocate a specific quantity of sand at one of its lakefront parks.

A contractor recently completed the second phase of an annual project which excavates sand off the shoreline of Madison Township Park beach and deposits it back into Lake Erie a bit further to the east.

The township is required to relocate a total of 7,200 cubic yards of sand at the park each year — in two equal loads during the spring and fall — to comply with terms of an amended agreement with the U.S. Army Corps of Engineers.

In 2012, the township received a permit to construct three breakwaters off the shore of the park. The breakwaters were installed to help prevent erosion and redevelop the shoreline into a beach.

To secure the permit, township trustees agreed to terms of a sand monitoring and bypass plan. The Army Corps of Engineers requires such plans to ensure that an erosion-control project off one property doesn’t increase erosion on neighboring properties by adversely affecting the parallel flow of sand along a shoreline. This movement also is known as littoral drift.

Initially, township trustees agreed to a long-term plan that required the services of a surveyor and excavation company each year.

The surveyor would measure the quantity of sand to be bypassed, or moved, from the project area in front of the breakwaters. A company specializing in excavation then would be contracted to dredge sand from the water in that vicinity and dump it back into the lake at a point east of the breakwaters and boat ramp, within the park’s property.

Eventually, the Army Corp of Engineers modified the agreement so Madison Township no longer needed to hire a surveyor.

“The Army Corps of Engineers waived the annual sand survey requirement provided we would agree to move 7,200 cubic yards of sand annually in perpetuity,” township Trustee Ken Gauntner Jr. said. “It saves township money, somewhere between $6,000 to $8,000 a year, which is approximately what we were paying to have the annual sand survey done by an engineering firm.”

In 2020, trustees approved a two-year contract with C.I.R. Inc. of Geneva to perform the sand removal and replenishment project at Madison Township Park. That pact costs the township $17,856.

“As much as I really hate moving the sand from one end of the beach to the other end, and then dumping it back into the lake, it is now part of our park budget,” Gauntner said. “It seems like a waste of taxpayer dollars, and a very odd requirement. However, I have now resigned myself to the fact that it is the cost of doing business, and providing one of the nicest beaches in the area to our residents.”

Gauntner, who said he’s been observing Lake Erie since he was a youngster in the early 1960s, also believes storms are more to blame for erosion than the township’s three stone breakwaters.

“Beaches come and go with storms,” he said. “It depends on if the storm comes in from the northeast or northwest. You can have a big beach build up or very little beach, depending on which storm you get.

“The amount of sand on the beaches in my opinion are more affected by storms than our rocks in the lake.”