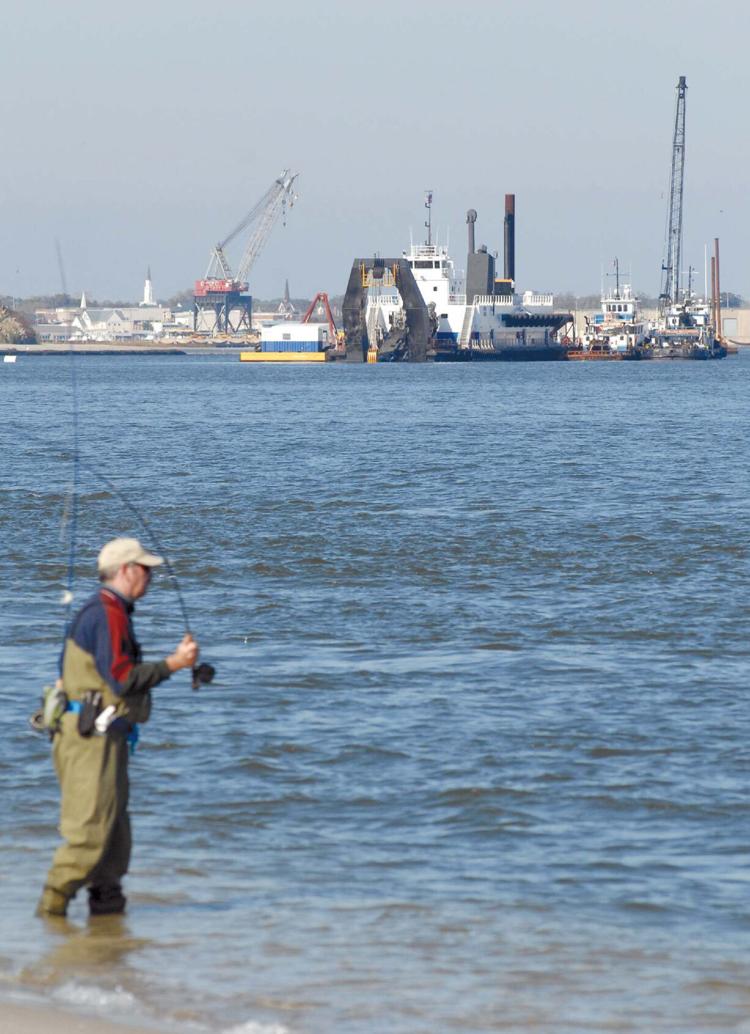 A dredge works in the waters off the coast of Carteret County in this file photo. (News-Times photo)

BOGUE BANKS — A referendum for a quarter-cent hike in local sales and use taxes failed again Nov. 3, meaning local governments still have to chip in on dredging projects.

This year’s General Election ballot included a question on whether or not Carteret County voters support a local quarter-cent sales tax increase. While state statute doesn’t allow the County Board of Commissioners to obligate how tax revenue will be used, commissioners have said in previous public statements they wished to use the additional revenue for paying off public school debts and waterway management, the latter of which includes dredging and other maintenance.

“It would have allowed visitors and tourists to shoulder some of the cost of our county’s government activities, including waterway maintenance,” he said. “For each of the past several years, the town has funded our own inland waterway maintenance by dredging the channels that lead from Atlantic Beach to the ICW (Intracoastal Waterway). We dedicate a portion of our property tax to this endeavor each year.”

While the referendum failure means there won’t be any county funds for dredging, Mayor Cooper didn’t seem worried about the continued maintenance of the town’s channels.

Mayor Cooper said he’d support putting the referendum on the ballot again in the next election. If it passes, he said, it could mean slightly lower property tax rates for Atlantic Beach taxpayers.

On the west end of Bogue Banks, Emerald Isle Town Manager Matt Zapp said in an email Monday to the News-Times his town’s officials handle local dredging in a similar way to Atlantic Beach — a combination of local and state funding.

“For public projects, the state has (a) 2/3 reimbursable grant program via the Shallow Draft Navigation Channel Dredging and Aquatic Weed Fund,” Mr. Zapp said, “which includes an application/award process. The Shallow Draft Fund is endowed by a portion of boater registration fees and 1% of the marine gas tax collected throughout the state.”

The remaining costs are the responsibility of a given local government. Mr. Zapp said Emerald Isle officials pay their share via the town’s general fund.

“If the sales tax referendum passed, then there would be a reserve fund established at the county, which would be distributed to the towns or used by the county to pay the 1/3 local government match,” he said. “In theory, this step would have alleviated some of the burden on our property tax, as proceeds from a sales tax are created by visitors and residents alike throughout the town and county.”

Mr. Zapp said approval of a referendum could save Emerald Isle officials “tens of thousands per year.”

For all the towns in the county, it could have saved hundreds of thousands of dollars per year, according to Greg Rudolph, head of the county’s Shore Protection Office, which oversees dredging and beach nourishment projects.

Beaufort Mayor Rett Newton said in an email Tuesday to the News-Times the waterways around Beaufort have been an important part of the town since its inception “and will continue to be with property dredging.”

Mayor Newton said county officials have contributed to Beaufort’s dredging expenses on occasion, but not every year.