Wind and Solar Are the New Cash Crops 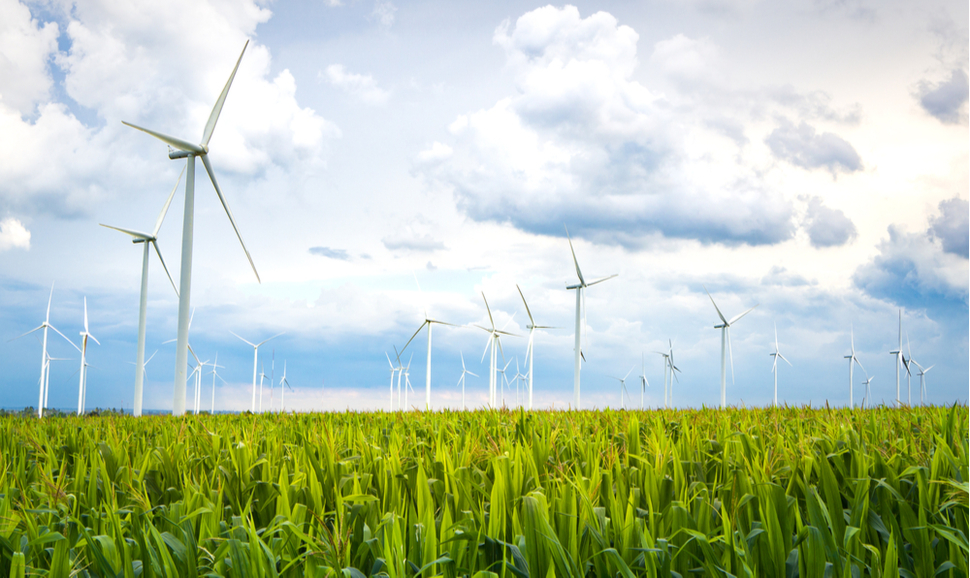 Photo by Max play on Shutterstock.

We’re living in an era of big numbers and rapid shifts. In a matter of weeks, the pandemic transformed the lives of billions all over the world. In Congress, billion-dollar spending packages have given way to trillion-dollar stimulus measures.

This is a time of big numbers in the energy domain as well. For example, meeting the emissions-reduction goals contained in the House of Representatives’ Congressional Action Plan implies trillions of dollars of investment in clean energy technologies, including wind and solar energy projects, in the coming decades.

Because of the remarkable drop in clean energy technology costs, it is clear that this level of wind and solar photovoltaic (PV) project investment will lower, not raise, electricity bills. The 2035 Report, a detailed study from the University of California-Berkeley and GridLab, illustrates one possible evolution of the United States’ electric grid towards 90 percent decarbonization by 2035 at a cost lower than today’s system.

But what does this mean for the communities that host these projects? Wind and solar projects will need to be sited somewhere. That “somewhere” is, with few exceptions, in rural America. To help contextualize the implications of this investment for rural areas, we use the 2035 Report’s analysis results to dig into the forecasted rural renewable build-out and make some comparisons of this investment with other economic activities in rural communities. This is what we found:

If the United States introduces no new policies over the coming years, 2035 Report authors projected the nation will still host 350 GW onshore wind and 150 GW utility-scale PV by 2035. But in a scenario where the United States achieves a 90 percent decarbonized grid by 2035 while still decreasing power costs from today’s levels — we would have more than 500 GW solar and more than 600 GW wind by 2035. This represents a nearly seven-fold increase compared to current U.S. wind and solar capacity.

While the 2035 Report also discusses the role of distributed and offshore renewable energy, both the “No Policy” case and the 90 percent clean case forecast that a majority of renewable capacity will be utility-scale solar and land-based wind. These resources will continue to be built in rural areas of leading states and regions such as Texas and the Great Plains. In addition, we can expect to see much more on-shore wind and utility-scale solar development in states such as Florida, Ohio, Georgia and Pennsylvania, which to date have had relatively little wind or solar buildout.

2. Wind and solar investment to match total for rural highways, roads and bridges

According to the Congressional Budget Office, in 2017 federal, state and local governments spent a total of $441 billion on various categories of infrastructure. The largest category of infrastructure spending was highways ($177 billion), followed by water utilities ($114 billion), then mass transit ($70 billion).

In the 2035 Report’s 90 percent clean scenario, average annual investment in wind and solar between now and 2035 would be $82 billion per year. This is slightly less than public spending on highways in rural communities, and higher than public investment in other classes of rural infrastructure.

In addition to direct investment in wind and solar, the clean energy transition will drive significant investment in grid infrastructure and battery storage in rural communities.

Many organizations advocate for increased public investment in rural America, as a means to drive broader economic development and combat the economic stagnation impacting rural areas. The wind and solar industries are already driving investment toward states with large rural populations, and are poised to support dramatically expanded infrastructure investment. And while the vast majority of highway investment is public, coming from federal, state and local governments, the vast majority of solar and wind investment likely will come from the private sector.

3. Revenue from wind and solar will exceed revenue from other major commodities

The United States is a major consumer and exporter of agricultural products. The top U.S. crops (by land and revenue) are corn and soy. In 2019, U.S.-grown soy and corn generated more than $84 billion in revenue, representing more than 40 percent of revenue from U.S. crops.

But as a byproduct of the rapid expansion of renewable energy laid out in the 2035 Report, these staples will be overtaken by two new cash crops: wind and solar. Over the next decade, revenue from solar and wind is likely to surpass revenue from corn or soy.

It’s worth noting that revenue from agricultural products is subject to highly uncertain commodity prices and geopolitical events (Chinese tariffs on U.S. soybeans). However, wind and solar revenue tends to less volatile as it is secured through long-term power purchase agreements.

Impacts and opportunities for rural communities

The level of investment in wind and solar required to power a 90 percent clean grid will have effects on rural land use, landowner revenue, taxes and jobs in rural communities:

Land use: 600 GW of wind will require on the order of 300,000 wind turbines, and 500 GW of solar will cover about 3 million acres. Those numbers may seem huge, until put into context. Nearly 1 million oil and gas wells operate in the United States, more than three times the wind turbines needed by 2035. Additionally, U.S. farmers dedicate 36 million acres to grow corn that will be processed into fuel ethanol — 12 times the land required for solar by 2035 under this scenario.

Landowner revenue: Landowners lease their land for solar and wind development, with lease revenues providing supplemental income on top of other land use revenues. Lease payments also can act as a financial hedge to landowners exposed to volatile crop commodity prices.

By 2035, wind turbines and solar arrays in rural America could generate more than $80 billion in annual revenue.

Taxes: With few exceptions, communities receive tax revenue from the projects they host. The primary tax benefit is generally increased property tax. Additional benefits may include sales tax revenue, fees (during project permitting), and taxes or other transfers to school districts.

Jobs: Local workers will provide at least a portion of the labor required to develop, build or maintain wind and solar projects. Local labor’s share of total project jobs can be increased if the host community has plenty of trained workers (as part of a local community college or other training programs) or if the community is home to solar or wind manufacturing, development or construction (EPC) firms.

The next 15 years will be a period of unprecedented change in our energy system, and our power system in particular. By 2035, wind turbines and solar arrays in rural America could generate more than $80 billion in annual revenue. Rural communities have a pressing opportunity to capitalize on their role in enabling this economic development and ensure that host communities maximize the local benefits of the ongoing power sector transformation already underway across the country.

This story first appeared on: