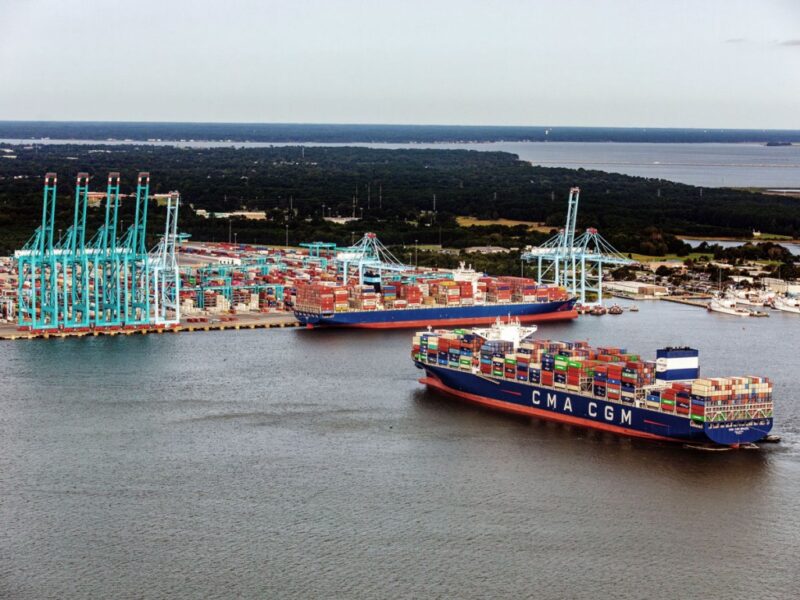 The Port of Virginia now offers six berths capable of accommodating ultra-large container vessels, such as the CMA CGM Brazil, the largest boxship to ever dock on the U.S. East Coast, with a capacity of 15,072 twenty-foot-equivalent units.

The Port of Virginia’s terminals are operating with record efficiency – while handling record volumes – thanks in part to the completion of its three-year, $800 million productivity and capacity-increasing projects.

Newly enhanced terminal infrastructure is playing a crucial role in expediting all-time-high containerized cargo volumes through The Port of Virginia, which is foresightedly advancing further projects to meet demands of shippers for generations to come.

“The Port of Virginia is in a really great place,” said Rob Cannizzaro, vice president of operations at Virginia International Terminals, “and we’re poised for continued success.”

While, largely due to the COVID-19 pandemic and U.S. trade issues with China, Port of Virginia volumes were down slightly earlier in calendar 2020, slipping a total of 4 percent overall for the 12-month period, the year concluded on an extremely high note.

The Port of Virginia enjoyed its best December ever, processing more than 260,000 twenty-foot-equivalent container units, up 16 percent from December 2019, following a November in which more than 280,000 TEUs crossed port docks – the busiest of any month ever for the port, surpassing the 274,000 TEUs handled in October 2020.

All told, the fourth quarter of calendar 2020 was the most productive three-month period in the port’s history, with more than 814,000 TEUs processed at the port’s two newly expanded container terminals – a year-over-year growth of more than 13 percent.

And the record performances have continued into 2021, with The Port of Virginia reporting its best January ever, with the nearly 271,000 TEUs handled being up more than 19 percent over the comparable year-earlier month.

Not only are the deepwater container facilities of the Hampton Roads area bustling with activity, but the inland Richmond Marine Terminal is flourishing as well, offering container-on-barge service along the James River as a cost-effective, ecofriendly alternative to a 90-mile truck dray along busy Interstate 64.

“Our customers recognize the value of this sustainable product,” Cannizzaro said, noting that volume in the service grew by more than 12 percent year-over-year in 2020, reaching more than 42,000 lifts.

Changing consumer purchasing patterns are leading to both elevation and extension of the typical peak shipping season, according to Cannizzaro, who brings more than a quarter of a century of industry experience to The Port of Virginia role he assumed in late 2019.

“Money that was typically spent by consumers on experiences is now – with people staying home – being spent on home improvements,” Cannizzaro explained. “People staying at home watching Netflix realize they need a new couch or a new big-screen TV, and not just for the holidays.”

The Port of Virginia is accomplishing this thanks to major projects – with a total investment of more than $800 million – that delivered more than 1 million TEUs of additional annual capacity between July 2019 and November 2020.

The most recent additions to NIT include two new ship-to-shore cranes – the largest of their kind in the United States – that arrived in fall 2020 as part of the renovation and reconfiguration of NIT’s south berth area. The mammoth super-post-Panamax gantries, capable of working ultra-large containerships deployed by global carrier alliances, are similar to four such cranes delivered in early 2019 to VIG, as well as two more units set for delivery to NIT in early 2022. A total of 30 ship-to-shore cranes now operate in the Norfolk Harbor.

Also at NIT, a two-year $44 million central rail yard expansion is slated to get under way in August, boding to double rail capacity.

Another key project to ensure sustainable growth in capacity is renewal of the chassis fleet at the port. When complete in March, the program is to bring the average chassis age down to 3 1/2 years for the 15,000-chassis fleet, with units featuring best-in-class LED lights and radial tires.

“At a time when the supply chain has struggled to accommodate the unprecedented volumes and changing seasonal shipping patterns as a result of COVID-19, chassis in The Port of Virginia remain in abundant supply, thanks in large part to our recognition of the importance of this vital complementary asset and our investment in a fleet upgrade and renewal program,” Cannizzaro said, adding that the chassis out-of-service rate has fallen below 1 percent while the number of road service calls has been cut in half.

Furthermore, The Port of Virginia’s terminal reservation system has been “a huge success, creating a predictable experience for our motor carrier community,” according to Cannizzaro, who cited ongoing collaboration with trucking leadership.

“We’ve delivered an average 36-minute turn time, with almost 90 percent of turns in less than an hour,” he added. “When a truck comes to a Port of Virginia facility, the driver knows exactly how long theywill be here.”

The enviable productivity and record throughputs at Port of Virginia container terminals are, according to Cannizzaro, facilitated by:
Looking to the future, The Port of Virginia anticipates productively filling the 1 million TEUs of added capacity while continuing to advance further projects, including enhancing capabilities inside and outside gates at Richmond Marine Terminal and Virginia Inland Port in Front Royal.

Most notably in Hampton Roads, the project to bring depth of the Norfolk Harbor to 55 feet and ocean approaches to as many as 59 feet keeps moving forward toward completion by the end of 2024, to make Virginia home to the deepest harbor on the U.S. East Coast.

And Virginia port officials are never willing to rest upon laurels, no matter how impressive they may be.

“John Reinhart once likened it to a race without an end,” Cannizzaro said. “You have to pace yourself. It’s a constant balancing act between projecting volume demand and building the capacity to serve it. Too early is a little bit better than too late. Here at The Port of Virginia, we believe what we’re doing is just right for proficiently serving the needs of port users for decades to come.”