UPDATED: Poppy Channel May Not Be Dredged In Time For Boating Season 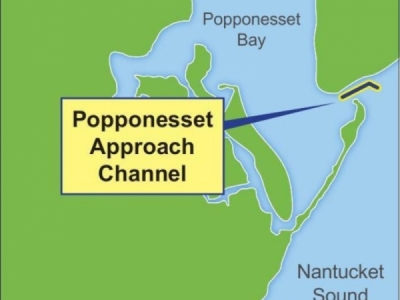 The Popponesset approach channel, the main channel into Popponesset Bay, has a dim hope of being dredged for the coming boating season.

The Barnstable County Commissioners met on Wednesday, March 27, and received a brief update on the channel.

Assistant county administrator Stephen Tebo provided the three commissioners an update and said that he tried to work with two subcontractors to complete the Mashpee dredging project, but neither could help.

“We’re going to do the best we can with what we have,” Mr. Tebo said at the meeting. “We’re up against the wall here.”

Mr. Tebo said that the county’s new dredge, the Sand Shifter, is not working again. Both winches on the dredge are broken and it also has an hydraulic issue.

As to why the dredge is currently in Chatham instead of Mashpee, Mr. Tebo said the Chatham project was a priority because it was a Mass Works project.

Wednesday’s discussion was left at that.

Neither Mr. Tebow nor county administrator John Yunits Jr. has responded to an inquiry.

The impacts of not dredging will be far-reaching: several larger boats within the bay will be trapped and not able to venture out into the ocean; the New Seabury Marina, which offers fuel and slip services, would lose a significant part of its revenue and be forced to lay off much of its staff; and town officials fear that the buildup of the sand could create unsafe conditions, because boaters may run aground on the sand, either entering or exiting the bay.

The issue came to a head at Monday’s meeting of the Mashpee Board of Selectmen after town officials were informed that the Barnstable County dredge bypassed Mashpee and traveled to Chatham upon completing a job in Barnstable.

The deadline to dredge the channel for the upcoming boating season is April 1.

Barnstable County has dredged the Popponesset channel for the last several years. This year, the county’s fleet has encountered maintenance issues. One of the county’s two dredges—the Cod Fish—is more than 20 years old, while the newest member of the fleet—the Sand Shifter—has run into several technical problems since its purchase.

Compounding the problem, the county has several projects to complete within a tight time frame, as federal and state time-of-year restrictions come into play, including the protection of piping plovers and groundfish.

Kenneth H. Bates, chairman of the Mashpee Waterways Commission, said that the town could receive an extension beyond April 1, but the wheels must be set in motion for the dredging project in order to receive amnesty.

Mr. Bates reported to selectmen on Monday that the town has taken all the right steps to have the channel dredged. Permits have been lined up, the town notified the county of the project, and the county informed the town that the work would be completed. Equipment, planning and doing the work are the county’s responsibility, he said.

The commission chairman said the county dredge program has been successful since going into effect in 1997.

Over the years, however, the county has taken on more dredging projects. This year’s technical problems have made even tighter the narrow window of time already circumscribed for dredging.

Mr. Bates said that he has gotten in touch with several dredging contractors outside the county but has not found an available dredge. The county, he said, is working on getting a dredge to the area. Mr. Bates is also in negotiations with a company to get additional piping for pumping the sand onto Poppy Spit.

Mashpee Town Manager Rodney C. Collins said that he is frustrated with what he characterized as a lack of communication from the county. As early as February, he said, the county notified the town that the project would be completed.

“Why weren’t we notified before the 11th hour?” Mr. Collins asked, but no county representative attended the selectmen’s meeting to respond.

If the town had been notified earlier, Mr. Collins said, he could have taken action.

During the public comment period of the selectmen’s meeting, a number of residents cautioned the board and public what would happen if the channel were not dredged.

Brian Lewis of Daniel’s Island spoke on behalf of the New Seabury Marina. He said that 30 percent of the slipholders would not be able leave the bay. Additionally, several privately docked boats would not be able leave the bay either. Both issues, Mr. Lewis said, would result in a significant decrease in revenue for the marina, which would have to cut its workforce by 50 percent.

Timothy W. Leedham, owner of Bosun’s Marine, said he was astonished when he learned that the channel would not be dredged. He recently measured the depth of the channel and said that the water was only up to about his knees. Mr. Leedham said that hundreds of boats in the bay need some four feet of water and that boaters will be running aground at high speeds.

“This is a safety issue,” he said. “There are going to be accidents.”

Michael Oleksak, president of Save Popponesset Bay, urged the board to take every possible action to get the channel dredged.