“The Port That Never Sleeps”: Savannah’s Ambitious Plans For Expansion 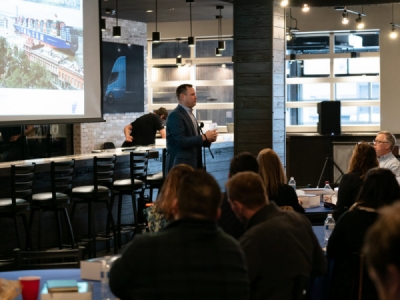 Georgia Ports will invest $2 billion in capital expenditures upgrading and expanding the Garden City Terminal—Savannah’s container port—over the next decade and will nearly double its annual traffic to eight million twenty-foot equivalent units (TEUs) by 2028. A Georgia Ports official said that new inland intermodal facilities and ship turn times under 30 hours allowed Savannah to compete with West Coast ports on cost and speed to the Midwest.

Porter said that Savannah’s Garden City Terminal was the most efficient and fastest growing port in the United States. Currently, Savannah’s traffic (4.36 million TEUs in 2018) makes it the fourth busiest port in North America, after the Ports of Los Angeles, Long Beach, and New York/New Jersey.

Georgia Ports wants Savannah to reach 18,000-20,000 trucks per day while simultaneously shortening the time trucks spend in the port. Last year, gate moves increased by 8 percent, but trucks spent an average of only 53 minutes in the port.

“Drivers serving the Ports of LA or Long Beach may complete two turns in a day, while at the Port of Savannah, that number is six to seven turns a day,” Porter said.

The Garden City Terminal will grow its capacity ahead of demand and prevent congestion and delays by embarking on a series of large-scale infrastructure projects, including a $200 million Mega Rail terminal that will add 97,000 feet of track and double the port’s rail capacity. Truck gates will be widened and slots for more than 10,000 containers will be added.

As container traffic rises, so does the need for warehousing. Porter said that warehouse capacity near the port totaled 58.2 million square feet, but the facilities are filling up faster than they can be built: over the past two years, nearly 10 million square feet were added, but available space shrank slightly.

“Currently, an unprecedented 9.75 million square feet are under construction in the Savannah market,” Porter said.

Efficiency is key to the port’s capacity growth. Porter said that Savannah will have 42 ship-to-shore cranes by 2028, each of them capable of moving 37-42 containers per hour, while cranes at West Coast ports handle only 24-28 boxes per hour.

“We keep buying cranes so we can turn ships in a day,” Porter said. The trend in the maritime industry is toward larger ships that make fewer stops: even though in 2018 the Garden City Terminal’s business grew by 9%, weekly ship visits have dropped from 42 vessels to 35 vessels. Freight flows are becoming more punctuated and less distributed, driving the need for more cranes that can unload larger ships in a short window.

Why does Georgia Ports care so much about turning a ship in a day? Because every day matters in the competition between East Coast and West Coast ports. A container ship makes the journey from Shanghai to Long Beach in twelve to thirteen days, but sailing from Shanghai through the Panama Canal to Savannah is a 24 to 26 day trip. Porter explained that West Coast ports are less efficient and western intermodal networks are more congested than in Savannah: whereas the Garden City Terminal turns a ship in a day, in Long Beach that might take four or five days. That means that Asian shippers can get their freight to interior markets like Chicago, St. Louis, and Dallas just as quickly through Savannah as they can through Los Angeles or Long Beach, and lower drayage and rail rates more than make up for the difference in East Coast/West Coast maritime rates, or what we call the Panama spread (FBX.PANA).

Vital to achieving that level of service is the network of intermodal facilities, called “inland ports,” that Georgia Ports is constructing throughout the state. The Appalachian Regional Port (ARP) opened in August 2018 in Crandall, Georgia, in the northwest region of the state.

The facility is directly connected to the Garden City Terminal by 388 miles of CSX track and has easy access to I-75 and U.S. 411. The Cordele Inland Port in Cordele-Crisp County provides a direct rail connection from Savannah to markets in southwest Georgia, southern Alabama, and western Florida. Georgia Ports plans to build a third inland port somewhere along the Georgia – Alabama border.

Under its current operations, the ARP has a capacity of 50,000 containers per year, but that can easily be expanded to 100,000 when demand justifies it. The inland port has been slowly growing its traffic as shippers convince trucking carriers to give them rates to the facility.