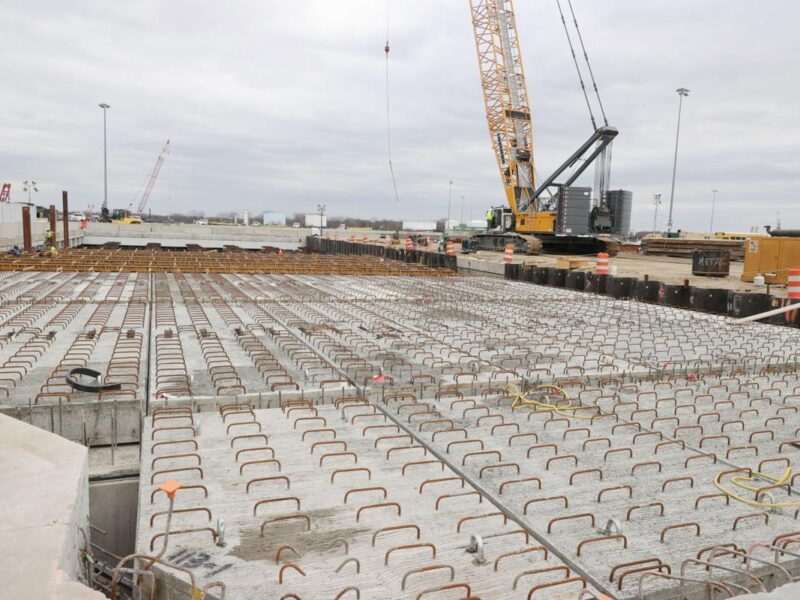 Just across the Delaware River are the runways for Philadelphia International Airport, uncharacteristically quiet in this time of COVID-19.

This is the port where a company called EEW will soon begin building a factory to make the gigantic monopiles that hold up offshore wind turbines.

Ørsted North America, which is building the state’s first offshore wind farm about 15 miles southeast of Atlantic City in federal waters, has a contract with EEW to make the structures. EEW has said it will provide 500 union jobs here

Those jobs represent the start of a new industry that has promised thousands of high-paying jobs to people who live throughout South Jersey, where the median income lags that of the state as a whole.

Energy from offshore wind is going to be expensive, said state Senate President Steve Sweeney, who worked for decades to make the port a reality, along with Assemblyman John Burzichelli, D-Salem, Gloucester, Cumberland, and the Gloucester County Improvement Authority.

“If New Jersey ratepayers are going to be paying for that, there needs to be a benefit with jobs,” said Sweeney, a former ironworker who did precast structural steel work like building bridges.

People are counting on that influx of good paying jobs throughout South Jersey. There are plans that the sections made here will be put together into 400-foot-tall monopiles by as many as 1,500 workers at the New Jersey Wind Port to be built in Salem County; and that Atlantic County will be the center of hundreds more jobs in constructing the wind turbines, maintaining and servicing them.

Ørsted won a competition to build the state’s first 1,100 megawatts of offshore wind generation, in part by promising economic development for the state. Ratepayers will subsidize the construction and running of the farm for 20 years.

“This is the first major new port on the Delaware in 50 years,” said George Strachan, executive director of the GCIA. “There has been a bigger vision here” that has taken decades to come to reality.

It used to be a vacant brownfields site, the leftovers of a former oil tank farm and other industrial uses.

“It looked like a moon filled with craters,” Burzichelli said. “We raised it up 11 feet, for a 100-year flood.”

At a cost of about $400 million, the South Jersey Port Corp. has created a modern port with room for manufacturing facilities, and the union jobs they bring.

It has built a special dock on pilings, as required by the state Department of Environmental Protection, with two berths for ships on the river and one on Mantua Creek.

“For environmental reasons, they wanted it on pilings, which takes longer and costs more,” Sweeney said. The dock is almost completed.

“This was designed to handle the weight the wind industry had in mind,” Burzichelli said of the dock, adding the monopile sections are about 3,000 pounds each.

“They will roll down here to be loaded onto a barge,” Sweeney said, to be assembled at a port in Salem County, then the structures will be shipped to the site for installation.

Lee Laurendeau, CEO of EEW-American Offshore Structures, said the company has provided 1,000 monopiles to Ørsted projects in Europe and is able to produce the largest — up to 40 feet in diameter and 400 feet long, made of 5-inch-thick steel plate.

When put together, each can weigh up to 5 million pounds, which is equivalent to 13 of the largest 747 jets, Laurendeau said.

“They will be rolling off this dock in a few years,” he said.

The port is surrounded by a neighborhood on one side and other industrial sites on the other.

Along River Road, waterfront homes that abut the port look out over the river to the airport.

Nearby, a Little League field is set between two oil tank facilities. And the site of the nation’s first federal land purchase, Fort Billingsport, is a pocket park with a playground between two large industrial developments.

With neighborhoods so close by, it was important to keep the truck traffic generated there from interrupting private life, Sweeney said.

“People who live nearby can walk or ride their bikes (to the port),” Sweeney said. “But there will be no trucks driving through neighborhoods.”

Instead, the port built a 1-mile connector road from Route 295 directly to the port and a rail spur to keep trains from going through town, along with a high sound wall around the property to keep the noise from disturbing nearby homes.

“We are unveiling a $250 million investment … led by Ørsted and EEW,” Gov. Phil Murphy said in December, as he stood in high winds on the shore of the Delaware River for a news conference announcing the deal. He called it the largest investment in offshore wind in the United States.

“This will be a state-of-the-art factory turning out steel components, not just for offshore wind farms off our coast but nationwide,” Murphy said then.