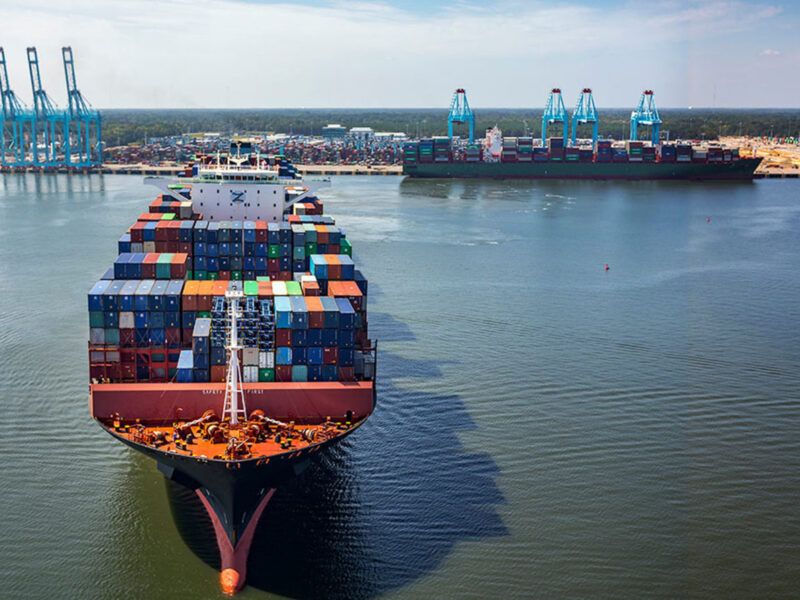 The Port of Virginia is a major container port, but wants to diversify business with breakbulk, roll-on/roll-off, and military cargoes. (Photo: Virginia Port Authority)

Virginia International Terminals last month won a $15.4 million contract for stevedoring and terminal services to support military cargoes, boosting the diversification strategies of the Port of Virginia and the Defense Department.

Under the five-year contract awarded by the U.S. Transportation Command, the port’s commercial arm will handle inbound and outbound containerized cargo, heavy equipment, and vehicles transported by military and civilian vessels.

Roll-on/roll-off and geared vessels will both call at various terminals at the Port of Virginia, said Frederick Rice, a spokesman for Military Surface Deployment and Distribution Command. Geared vessels have their own cranes to lift cargo on and off.

The Port of Virginia is one of the nation’s major gateways for containerized goods, but officials are trying to spread into other lines of cargo business such as heavy machinery and support for offshore wind development projects.

“This is part of a larger, ongoing effort to diversify our overall cargo mix beyond containers. For many years we handled military cargo moves and that business slowly migrated away from Virginia. The effort is to bring it back,” Joe Harris, spokesman for the Virginia Port Authority, said.

Norfolk is one of 23 strategic seaports that commit capacity to the Defense Department for use in contingencies.

Port diversification is an important component of the DoD’s readiness posture. Although the DoD has relied on certain seaports more than others in the past, it is important that all ports enrolled in the Strategic Seaport Program are given the opportunity to exercise their capabilities in peacetime so they are ready to support the DoD’s requirements in the event of a contingency,” Rice said in an email.

In related news, TRANSCOM on Friday awarded Delaware River Stevedores Inc. a contract for loading and unloading cargo at the Packer Marine Terminal in Philadelphia. The company will only collect the money when task orders are issued for specific work under the five-year contract with a $37.4 million ceiling.