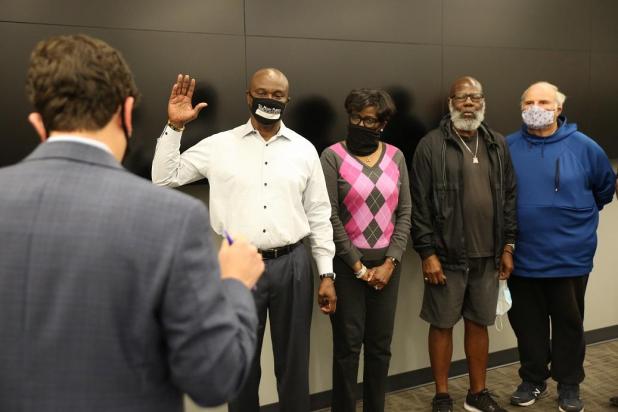 Matthew K. Glover, in white shirt, takes the oath as a Port of Morgan City commissioner from attorney Gerard Bourgeois. With Glover were his wife, Phyllis Glover, and Morgan City Councilmen Ron Bias and Lou Tamporello. The Daily Review/Bill Decker 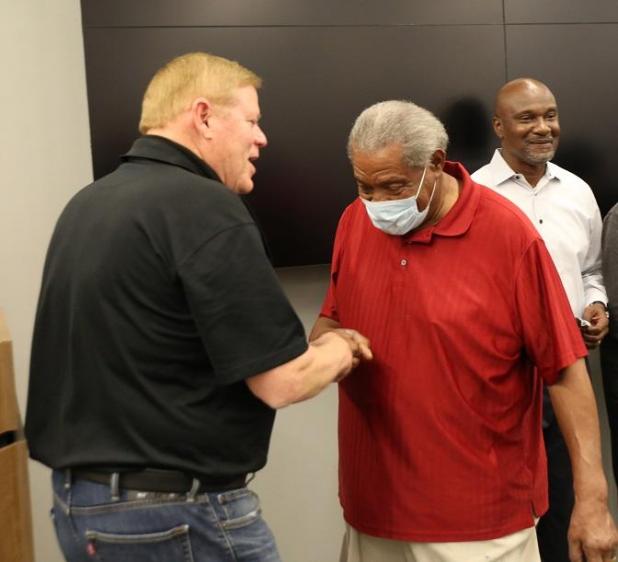 Port of Morgan City Executive Director Raymond “Mac” Wade, left, praises outgoing port Commissioner Tim Mathews, who is stepping down from the board. Mathews will be succeeded by Matthew K. Glover, right.

The Morgan City Harbor & Terminal District board welcomed a new member Monday and turned its attention to an old problem: opening the channel between Crewboat Cut and the sea buoy to a width that can accommodate large vessels.

The board also learned that vessel transits were down again in February. And commissioners heard a rare dissenting voice in the push to bring a National Estuarine Research Reserve to the lower Atchafalaya in St. Mary Parish.

The new commissioner is Matthew K. Glover, a Morgan City government appointee to the board. Glover is a Nicholls State graduate with more than three decades of work in energy-related companies.

Glover succeeds Tim Mathews, the board secretary who stayed on the board past the end of his term in December until his replacement could be appointed. The board voted to name Commissioner Steven Cornes as the new secretary.

The Great Lakes Dredge & Dock Co. vessel Alaska, a cutter suction dredge, will be in a shipyard until May. Then the Alaska is expected to go to work on the channel from Crewboat Cut, south of Morgan City, to Eugene Island.

The Alaska is a 224-foot dredge that works by excavating material from the channel floor and pumping a water slurry up to five miles through a pipe.

The current depth is 18 feet, close to the 20-foot depth authorized by the Corps, with a width of 150 feet. Wade said the immediate goal is to widen the channel to 200 feet.

From Eugene Island to the sea buoy, the Brice Civil Constructors dredge continues its work. The Brice dredge is designed to clear the channel of sticky fluff mud that makes navigation difficult.

The hope is that a better channel would mean the return of large import-export vessels to the Port of Morgan City, where cargo-handling would have economic spinoffs.

The Brice vessel will be heading north while the Alaska moves south, Wade told the commissioners.

“Those two will meet,” Wade said, “and we’ll have [an open channel] all the way up for the first time in a long, long time.”

Navigation in local waterways would be complicated by high water, which would deposit sediment that creates shoals. After months of low water, the Atchafalaya River at Morgan City is expected to rise from Monday’s 3.8 feet, or more than 2 feet below the 6-foot minor flood stage, to 4.6 feet by midnight Friday, according to the National Weather Service.

Later in the meeting, the commissioners approved a resolution supporting a St. Mary site for a National Estuarine Research Reserve. The Morgan City, Berwick and St. Mary Parish councils and the St. Mary School Board have all passed similar resolutions.

The reserve would require a state-federal agreement to designate some piece of public or private land in an estuary as a site to be used for research and educational purposes. The federal government would pay for 70% of the operational costs, and the state would pay the rest.

Six Louisiana zones in which a reserve could be located, from the Calcasieu River to the mouth of the Mississippi, are under consideration in a search process being led by the Louisiana Sea Grant organization at LSU. The lower Atchafalaya is one of the zones.

St. Mary Excel has advocated for a local reserve site because of the potential educational and economic benefits. Officials in the NERR program said the reserve won’t bring new federal restrictions, and that state land use rules will continue to apply.

That reassurance didn’t reassure Commissioner Troy Lombardo of Berwick, who cast the lone vote against the resolution.

Lombardo said his opposition is based on his 30 years in the oil business.

“We are an oil-dependent area,” Lombardo said after the meeting. “I’m always nervous when we have a national program come in to protect wetlands. .. There’s going to be no drilling in an estuary.”

And on Monday, Coast Guard Senior Chief Derrick Sullo reported that 1,607 vessel transits through local waterways in February, down 29% from February 2020.