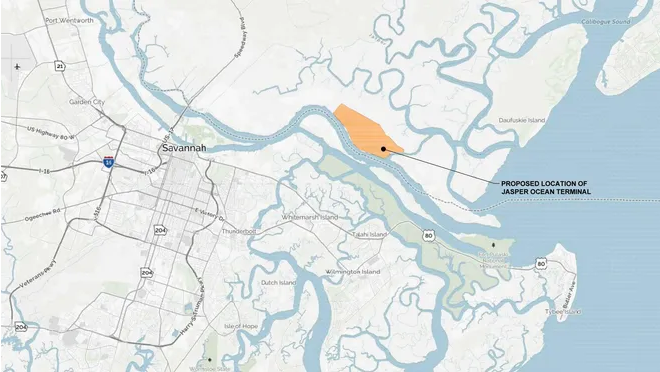 Jasper County took a major step forward this month in its longtime effort to move the Jasper Ocean Terminal closer to reality.

County Council voted unanimously March 1 to ratify an agreement in which the South Carolina Ports Authority will transfer its ownership of the port’s future location to the county.

“So much work has gone into this, for so many years, to reach the point where we could officially approve the paperwork at our council meeting Monday night,” council chair Barbara Clark said in a statement. “It’s a really, really big deal.”

Once the transfer is completed, the agreement to build a container port on 1,500 acres on the South Carolina side of the Savannah River would be between Jasper County and the Georgia Ports Authority. Jasper County administrator Andy Fulghum said the agreement still must be ratified by both states’ ports authorities.

“Currently, the agreement proposes that the county step into the place of (SCPA) and assume the same obligations that (it) currently has in the bi-state partnership,” he said.

The S.C. Ports Authority plans to move ahead with other plans to increase container capacity, CEO Jim Newsome said, including the new Hugh K. Leatherman Terminal in North Charleston. The Georgia Ports Authority did not respond to a request for comment about the agreement.

“The new agreement between the South Carolina Ports Authority and Jasper County will enable Jasper County to pursue an earlier solution for the Jasper Ocean Terminal, hopefully enabling them to realize the considerable economic benefits envisioned by them for that region and the state overall,” Newsome said.

SCPA’s work to increase capacity in Charleston, which led it to push back the timeline for the Jasper County port it would have jointly operated with GPA, frustrated local officials in recent years. It also paved the way for the new agreement to transfer the property.

Then-Gov. Nikki Haley said in a visit to the county in 2016 that work was expected to begin on the port in 2025. Two years later, SCPA said it would not be needed until 2035 based on updated capacity estimates in Savannah and Charleston.

“The county previously worked with a private sector partner to develop the port. Then, the two states of Georgia and South Carolina partnered to work on the project through the GPA and (SCPA),” Fulghum said. “Now, this agreement proposes to replace the entity responsible for carrying out the state of South Carolina’s obligations for the joint venture from the (SCPA) to the county.”

County Council discussed possible legal action against SCPA before changing course in an effort “to work with the powers that be instead of fighting with them,” former Councilman Tom Johnson said last year.

Johnson, who worked on efforts to get the Jasper Ocean Terminal underway for years, said he believes Jasper County had nothing to lose with the new agreement.

“They robbed us of 15 years and now we’ve got some big challenges,” he said of SCPA. “.My hopes are that some sort of port will be put there by someone, doesn’t matter who or what kind of port, as long as it is a port.”

A bill to allow the state to borrow $550 million to upgrade rail service and technology at the port of Charleston was set to be debated in the Senate. Davis said he brokered the Jasper port agreement the weekend before and then agreed to let the bond bill move forward.

“I had the ability to block the bill,” Davis said. “I made everyone aware that Tuesday morning the agreement was a done deal. If I had not gotten the agreement, I was prepared to filibuster.”

Davis said the agreement is good for Jasper County and the Georgia Ports Authority because “Savannah had more container space needs immediately, around 2025 to 2028.”

“We’ve got a motivated partner here,” he said. “There is every indication that the Georgia Ports Authority needs more capacity.”

Davis said he plans to meet with GPA to discuss the agreement. He said the timeline of the port will now depend on the future needs of GPA.

“The timeline depends upon the exact nature of the Georgia Ports Authority’s need for capacity and the economic needs,” he said. “They can take satisfaction in knowing the likelihood of the port being developed is superior than it was before. This is a win for all parties, including Charleston, Georgia and Jasper County.”

Davis said about 10 years’ worth of engineering work has already been done at the port site. He said the county will need legal expertise and consultants as it moves forward with GPA.

“As a result of this bond bill, we may have the property, but we are still going to need ongoing and future engineering costs,” Matthews said during Feb. 23 discussion on the Senate floor. “… We will have to continue to work with the SouthernCarolina Alliance to exercise options on purchase of properties so that the Jasper port can be something that will benefit all the way from Aiken to Bamberg to Hampton, Allendale and Beaufort, and to me that’s the only way South Carolina is going to be the best.”

Fulghum said the county does not propose to spend any money from its budget, with $3.1 million to be transferred from SCPA. The money will be disbursed to the county from the S.C. Department of Administration once SCPA ratifies the agreement.

“The county has requested an additional $49 million from the legislature for items to include one half share of the anticipated cost of permitting, ongoing and future infrastructure studies, costs associated with the release of a federal dredge spoil easement on the site, and some near-term, port-related infrastructure work,” he said.

Davis said he is excited about what the next 10 years could hold for development in the region.

“With this new agreement, you are going to see even more manufacturers coming in and you will see growth in not just Jasper, but also other surrounding counties such as Hampton and Colleton,” he said.

“This port will bring a better property tax base. It is a game changer across the board. This port will be very attractive for private companies with the location of the port being at the mouth of the Savannah River. Jasper County is ready, willing and able.”