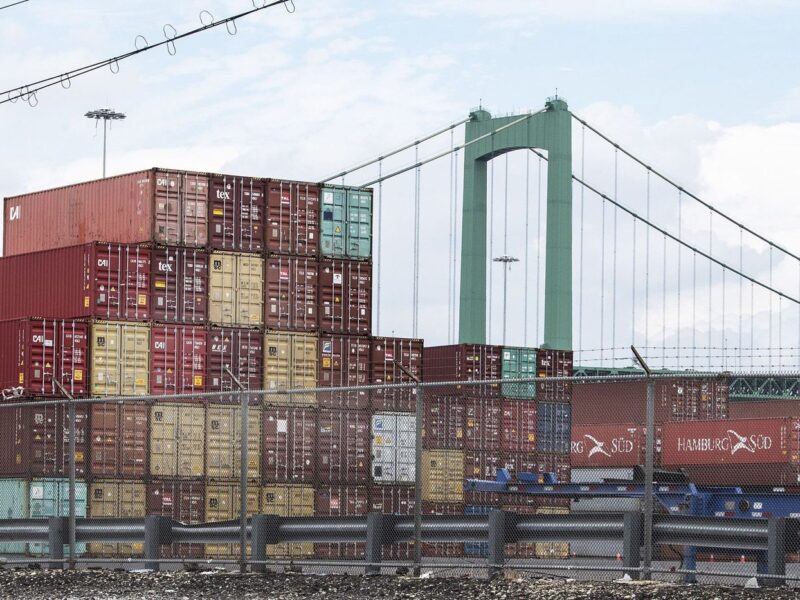 “We all collectively believe that the port can be one of the great job and revenue creators for the southeast part of the state over the next decade,” Gerry Sweeney said.

In an ongoing bid to make Philadelphia’s port more competitive with New York and Baltimore, elected officials and port leadership on Thursday kicked off construction of a $42 million warehouse in South Philly.

The building is going up a mile from the Packer Avenue Marine Terminal and is expected to create up to 300 jobs. The state is paying for the project under Gov. Tom Wolf’s multiyear port development plan, an investment of more than $300 million in cranes and other infrastructure.

“Today the Port of Philadelphia is the fastest growing container port on the U.S. East Coast, and this new distribution center is an important step to improve port facilities and bring more traffic to the port,” Wolf said in a video message that aired during a live-streaming of the groundbreaking ceremony.

The port, which goes by PhilaPort, has fared well even during the pandemic: It saw 7% growth in 2020, handling a record 640,000 cargo units.

That growth rate “shows the durability and the need for international trade,” as ships brought fruits, vegetables and other essential commodities, said PhilaPort board chair Jerry Sweeney. “Even though the pandemic shut down major parts of the economy, that trade dynamic was really important.”

PhilaPort supports 17,000 direct and indirect “good-paying, family-sustaining” jobs, Sweeney said. Expanding the port’s capacity to move cargo, such as by adding the new warehouse, won’t create new jobs just at the site, he said, but throughout the operations connected to the port.

“We all collectively believe that the port can be one of the great job and revenue creators for the southeast part of the state over the next decade,” Sweeney said.

The dredging of the Delaware River to a 45-foot depth, a massive, 30-year undertaking recently finished by Pennsylvania and the federal government, cleared the way for bigger cargo ships to come to Philadelphia. It was a “key driver” of the overall plan, Sweeney said, because it “increased the viability of the port dramatically.”

“There are some great examples up and down the East Coast where ports have really, really grown on the back of robust distribution-center landscapes,” said Leo Holt, the company’s president.

“For Wolf, his legacy will be really kick-starting the rejuvenation of the port,” Holt said. “Putting money into cranes, into distribution centers, into improvements in the terminal, you can see it paying off.”