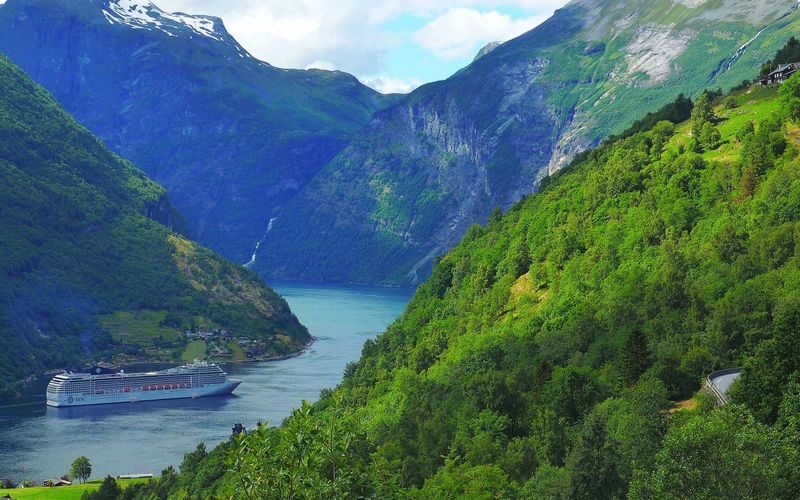 Norway’s billion-dollar luxury highway is floating as if it’s in a dream.

Norway is currently undertaking its biggest infrastructure roadway project in its history. Not only is this $47 Billion revamped road system set to change travel within the country, but it’s being called the world’s first ever floating highway.

Statements like that invite a lot of questions. Luckily, they all have answers. This high-tech approach to a long-standing issue will make Norway one of the global leaders in international travel.

Amazingly, this new endeavor looks to cut the time it takes to travel across the country down considerably. Areas of Norway that would have once taken 21 hours to navigate between will now require half the time. Its mere existence eliminates several ferry crossings and gives drivers a direct route to spots that would have been considerably difficult.

With the old roadway system, the nearly 700 mile trip from the cities of Christian Sound and the South would have required nearly one full day of a traveler’s time when driving an average of 30 miles per hour. In gas alone, the trip would have cost over $200 one way. Due to the economic setup of the nation, driving between these cities could often be a necessity for some, including those tasked with delivering goods. This plan can cut down on the time it takes, the money that’s spent, and the wasteful day of many drivers.

This project, along with other plans by Norway’s leadership, has made its economic future bright for 2021 and beyond.

Master Of The Sea

While ferry rides sound fun for a Sunday afternoon with the kids, it’s nothing that those seeking medical treatment or business events want as part of their day. In fact, at 45 minutes each in terms of time and $16 each in terms of price, these multitude of boating excursions are more of a headache than a sailor’s paradise.

The Coastal Route E39 eliminates those headaches like a giant underwater aspirin. The ferries, as part of this plan, will be replaced by modern bridges and floating tunnels. The submerged tubes, 100 feet below the surface, make up part of the overall highway and will allow a more predictable mode of travel. Cities in the country will be connected like never before and residents will have easier access to hospitals, schools, and even jobs.

These new roads will make life easier and more appealing for citizens of the area. Tysnes, a region of municipalities on the archipelago off the coast, has seen a drop in over 50% of their population over the past 100 years due to the inaccessible nature of the area. It’s a problem that has been plaguing most of Scandinavia and one that those in control hope can be solved by making the country easier to navigate and allowing residents a simpler way to head from one point to another, especially when it comes to emergencies, making money, and other essential travel.

This entire project could end up costing far more than is even being estimated and it leaves many wondering why the country doesn’t just turn to new roads or bridges instead of such an ambitious undertaking. The reason is weather.

Creating roads can be difficult due to Norway’s harsh weather conditions and, even when new roads are created, they can often be closed for safety. In turn, ferries are known for shutting service with little or no notice due to heavy winds and snow.

The Norwegian beauty is also a consideration and, due to the abundance of bridges needed to combat the ditches and deep fjords in the nation, the underground hidden roadways are the best bet for all involved.

The idea for a submerged floating tube bridge was actually the brain child of Naval Architect Sir Edward Reed back in 1886. Reed, a leading naval architect known for building ships used by the Japanese Imperial Navy in the Meiji period, was the first to come up with the idea and it was again proposed in 1923. However then, much like in the 1800s, the technology simply didn’t exist to make it possible.

It was nearly a century later when the plan started to come together and the country could finally embrace this long-known concept for revitalizing Norway. It’s been a long time coming and today, after long last, the citizens will have a chance to enjoy the benefits it offers.

The hope is that this floating highway will be accessible to traffic by 2050. The plan, as of now, is to bypass all ferry crossings and check in at 1100 kilometers. While Norway is the first to get behind Edward Reed’s 19th century proposal, they might not be the last. Engineers in China and Italy have already expressed interest in pursuing similar projects for their own countries. As goes Norway, so goes the world.