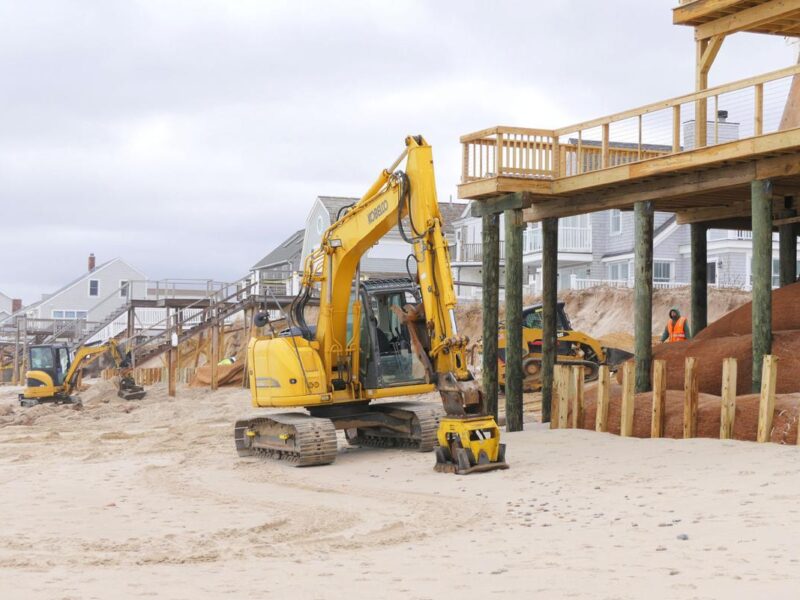 Crews work to repair some of the damaged homes on Salt Marsh Road and shore up the eroding beach in front of them. Storm-driven waves battered the homes on this section of Sandwich’s coastline early this week. At least one of the homes had to be completely demolished. GENE M. MARCHAND/ENTERPRISE

More than 15,000 cubic yards of sand was trucked to Town Neck Beach Thursday afternoon, February 4, and while it is a welcome addition, it is a small shield against a constant battering ram of winter wind.

In the past week another three beach houses on Salt Marsh Road were damaged by storm surges. At the other end of the beach, along White Cap Path, thousands of dollars worth of recently replenished sand was sucked out to sea. Debris from houses and fences still litter the Sandwich coast.

“We lost three houses and maybe more. Multiple storms do a lot of damage even though they were described as ‘moderate,’” said Natural Resources Director David J. DeConto. “It’s not the worst I’ve seen, but we’re not through the winter yet.”

Town Building Inspector Brendan Brides said he had issued tear down orders for three summer homes—at 100, 112 and 100 Salt Marsh Road—that had been damaged beyond repair.

Two of the three homes had already been undermined by a windstorm in December, Mr. Brides said. The most recent storm delivered the killing blows.

Mr. DeConto said storms with winds out of the north or east are particularly hard on Sandwich’s fragile coast. The series of such storms in recent weeks have pummeled home the point that hundreds of thousands more cubic yards of sand are needed to protect beach communities and the nearby downtown areas.

The town is awaiting final approval from the US Army Corps of Engineers to dredge about 388,000 cubic yards of sand from a site off Scusset Beach. The $25 million worth of sand would then be placed along Town Neck Beach.

Although storms will continue to rob the beach of sand, the 388,000 cubic yards of sand will greatly improve the health of the dune, the Army Corps and the town’s beach consultant, Woods Hole Group, have said.

Mr. DeConto said that although the sand replenishment and ongoing deposit is of sand will, hopefully, add many more years of life to the dune, it is expensive and storms will keep on coming.

That is why the town, county and state are looking at long-range plans for the future that include modifying roads and embankments, raising buildings and, eventually, retreating from the sea, Mr. DeConto added.

The selectmen have discussed placing coir logs and other artificial dunes along the coast, but they are temporary fixes that are designed to come apart, the natural resources director said.

“These envelopes are supposed to be covered—and re-covered—with sand, which is expensive,” Mr. DeConto said.

The coir envelopes placed along the beach on White Cap Path were just recently covered with sand, but this winter’s storms have sucked all the sand away and, in some cases, caused the logs themselves to deteriorate.

Town Manager George H. (Bud) Dunham said this week that photos of the now-naked coir envelopes and the condemned homes and other beach damage had been forwarded to the Army Corps and to state’s US Congressional representatives in the hope that the images would convey the town’s urgent need for federal help.

Meanwhile, on Town Neck Beach, Mr. DeConto welcomed the timely delivery of 15,000 cubic yards of sand, which was donated to Sandwich by the neighboring town of Bourne. It was the one positive bit of sand related news this week, he said.

“Although it’s a small portion of what we need, it’s a huge help,” Mr. DeConto said of Bourne’s donation. “We will put this in the most vulnerable area of Town Neck Beach and have a little bit more security.”

Mr. DeConto has said sections of Town Neck Beach will be closed to the public for at least the next two weeks as the earth moving equipment places the sand on the beach and grades it into place.

The boardwalk walkover stairs were undermined during the storm, Mr. Dunham told the selectmen Thursday night. Some of the Bourne sand may be used to stabilize the stairs.

The sand deposit is the second such gift from Bourne, which has a sand surplus from a dredging project.

This time Bourne dredged about 18,000 cubic yards of sand while cleaning a channel in Little Bay from the Pocasset River to Tobey Island.

Bourne gave Sandwich about 5,000 cubic yards of sand for beach renourishment in 2018 after dredging another boating channel.

Sandwich hopes the latest sand deposit and grading project is completed well before March 1 when the piping plovers return and new beach grass is planted, Mr. DeConto has said. 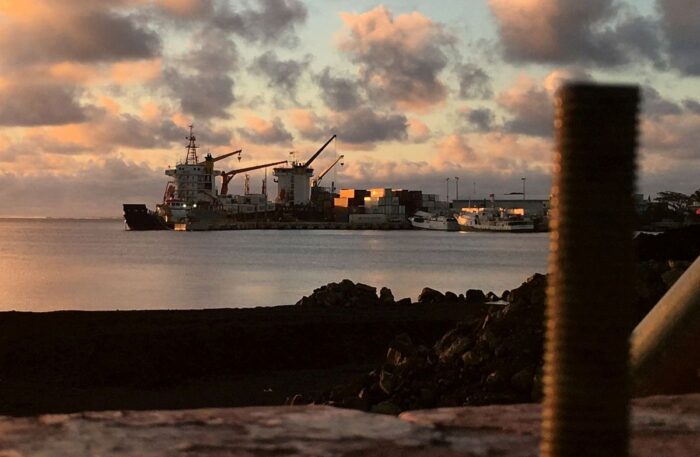 LONDON, Sept 22 (Reuters) – More than 150 leading companies and organisations including oil majors and port authorities on Wednesday called for the global shipping industry to be fully decarbonised by 2050, urging governments to step up action warning time was limited. With about 90% of world trade transported by sea, global shipping accounts for… Read More 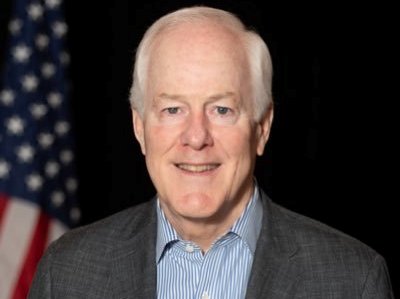 HOUSTON – Today, U.S. Senator John Cornyn (R-TX) issued the following statement after the signing of a U.S. Army Corps of Engineers Chief’s Report for the Coastal Texas Protection and Restoration Feasibility Study, which he passed legislation to help expedite and fully fund, to examine how best to protect the Texas Gulf Coast: “As we… Read More 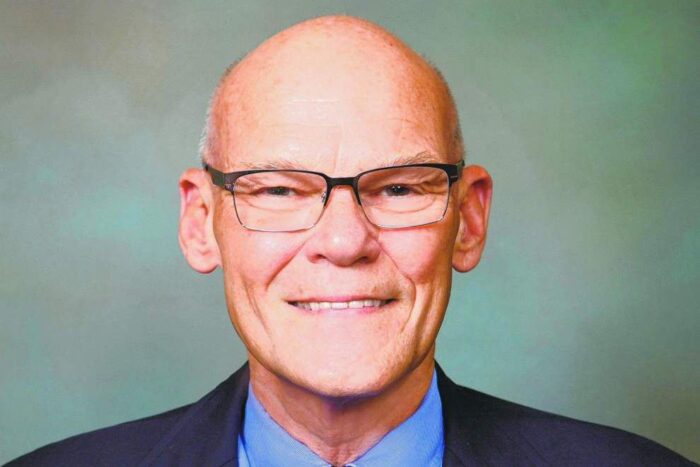 The state’s coastal authority chairman Chip Kline said it best: “No levee overtopping, no levee failures, no levee breaches — so a very different picture on the ground today after Hurricane Ida, compared to the picture we saw on the ground, following Hurricane Katrina. And that is thanks to the federal investment of $14 billion… Read More 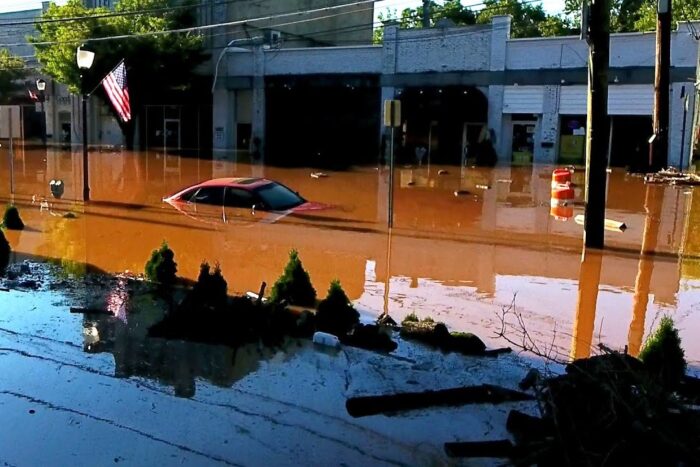 Ida swamped our infrastructure. How can we build better to stop future floods?

Say “storm drains” to people and their eyes might glaze over. Talk to them about the flooding that inundated the state after the remnants of Tropical Storm Ida dumped record rainfall on the state and that’s something most can relate to. Flash flooding from Ida washed away cars, inundanted basements and streets and was blamed… Read More 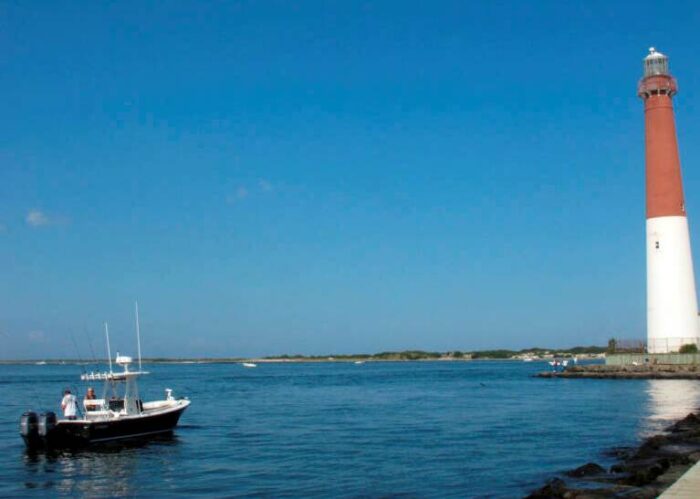 ‘It doesn’t eliminate all damage, but it will greatly reduce damages,’ said Robert Hampson, a hydraulic engineer with the Army Corps A proposed $16 billion plan to address back bay flooding, one of the major sources of storm damage at the Jersey Shore, is raising concerns about where water would go during storms, whether barriers… Read More