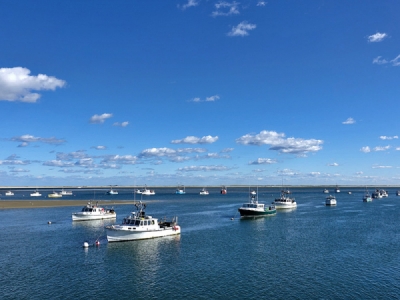 Coastal Resources Manager Ted Keon said the harbor channel opposite Lighthouse Beach is not navigable for larger vessels and that while the North Inlet provides enough water to access Pleasant Bay, the channel south into the harbor is very shallow from shoaling.

Several fishermen and other boaters recently addressed the issue before the board of selectmen.

“We are in need right now. This is a crucial time for the fishing fleet,” Feeney said.

Feeney asked the town to support the fishing fleet and do everything in its power to ensure safety.

“It’s not just for the fishing fleet, you also have to remember it’s the Coast Guard and it is all your recreational boaters,” he said.

Feeney said the conditions will need to be dealt with more this summer than it was the previous summer.

Emergency permitting to dredge the entry channel was granted last year but winter storms prevented the work from happening.

An order was issued by the Conservation Commission to allow for dredging this year, but that was halted by a legal challenge from a Minister’s Point property owner.

The issue is before the state’s Department of Environmental Protection, which will make the decision on whether to uphold the Conservation Commission order or require additional actions.

An adjudicatory hearing could be requested by Milden if he is unhappy with the state’s decision. Fisherman John Our said if the town gets the chance to dredge the work should be completed.

“If it doesn’t work then we have to think about something else,” Our said. “But we can’t say ‘oh we can’t do anything.’”

Charter Captain Mike Abdow said he employs a relief captain from Chatham and he could not provide him enough work last year.

Larger vessels have limited access in and out of the harbor except around peak high tide.

“When I wanted to get him out we couldn’t,” Abdow said. “We didn’t have enough water and now we have less water.”

Abdow said he knows it is hard for officials to find a solution.

“You have 80 to 100 families that live off that fish pier,” he said. “You are spending all kinds of money to put up brand new things so people can look down and see the boats. What if the boats aren’t there?”

Abdow said people come to Chatham to soak up the sun at the beach and to eat fresh fish.

“This is a big money maker for this town,” Abdow said. “This is the heart of this town.”

The comments follow the recent presentation of a study that showed worsening conditions for the harbor with difficult navigation for larger vessels.

Applied Coastal Research and Engineering and the Center for Coastal Studies offered preliminary findings of the first phase of a study of east-facing waterways.

The goal of the study by Applied Coastal Research & Engineering and Center for Coastal Studies is to understand how waters and the interactions of the two inlets are effecting flow and changes to beach and inlet morphology. The changes may cause substantial issues relative to shoreline erosion, navigation and impacts along the mainland.

The study is a result of a series of strong storms last year which produced a lot of flooding and erosion.

The analysis focuses on changes to the inlet and barrier island system since the 2007 inlet formation and morphological evolution of the shoals and channels with a focus on changes in water levels, current speeds, and tidal flow patterns.

Preliminary model findings indicate the south inlet is feeding water to Nantucket Sound and the North Cut is providing tidal flow for Pleasant Bay with shoaling cutting off access to the south.

The lack of sand coming from the north is also causing the quick breakdown of North Beach Island.

Although the study doesn’t include clear recommendations for action, it did acknowledge that dredging would likely be necessary for viable navigation.

Phase two of the study, which is underway, will focus on land change projections for the next several decades.