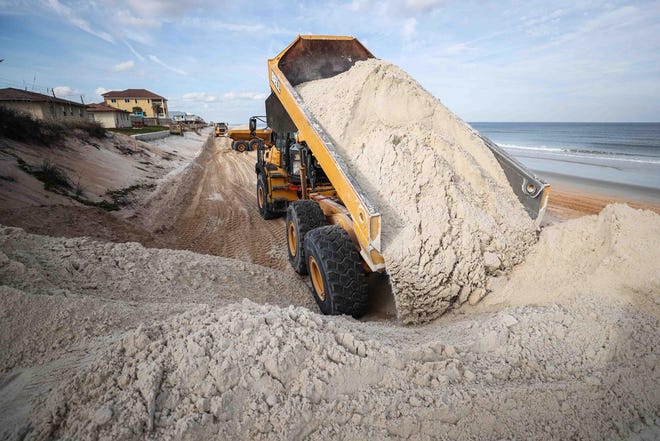 FLAGLER BEACH — While a few residents continue to hold out, the $25 million Flagler Beach dune restoration project deadline has been extended again, until April.

Flagler Beach officials held a meeting Thursday to update the public on the status of the federally funded dune project.

“I know that residents on the beachside are very upset with owners who are stalling the project,” said Al Hadeed, Flagler County Attorney, during the meeting on Thursday.

Hadeed said the project was originally scheduled to take place during the off season.

“When we started, I told you we’d be underway right about now and done by December,” Hadeed said at the meeting. “We’d be done before the winter season so that we could have the advantage of being able to do the project during a time when our tourism would be least affected.”

The new deadline is set for early next year.

“We met with them about two weeks ago to discuss how long they need to go through the legal process to get those remaining easements,” said Jason Harrah, senior project manager with U.S. Army Corps of Engineers in Jacksonville.

“They asked us to allow them until April 15 of 2021 to complete the legal process. So that’s what we’re gonna do.”

The dune project was extended in August because some property owners would not sign easements.

To ensure the project takes place, Flagler Beach resident Carla Cline turned to crowdfunding to try to convince the holdouts to reconsider.

Cline set up a GoFundMe page with the goal to raise $40,000 with the hope of paying off the remaining holdouts. As of Friday, the page has raised $49,700 — unchanged from August.

It is still unknown whether those property owners will accept the money and sign the easements.

In September, the county officials unanimously moved forward with legal proceedings to get one holdout property owner to sign an easement agreement.

“She is concerned about what’s going to be the effect on her property,” Hadeed said to the News-Journal on Friday. “So we’re answering those questions and hopefully will satisfy all her concerns and she will execute (the easement). “That way we won’t have to do a court proceeding. She won’t have to be bothered with it, we won’t have to do it.”

“We basically adjusted the schedule to allow them to get the easements for the contract,” said Harrah. “Then we will put the contract down sometime in May and move forward sometime in June or July.”

Harrah said the number of holdouts remains at six.

“The contract is broken up into what we call a base and an option,” said Harrah. “The base, you award that portion the majority of the length of the beach. You award that when you open the bid. But the option portion that can be awarded later on down the road. That’s why we call it an option.”

Harrah said that the contractor can be informed that the option portion of the contract may or may not come through due to real estate, lack of funding, for example.

The 2.6-mile project requires property owners with a parcel east of State Road A1A from South 6th Street to South 28th Street, to provide easements to the federal, state and local agencies involved so they can add sand and natural vegetation to fortify the dunes.

According to the county’s Shore up the Shore website, the project will reconstruct the eroded dune to extend approximately 10 feet seaward of its present location, and then gently slope down to the surf, extending into the ocean to lengthen the beach.

The project also includes planting native vegetation that has historically grown in Flagler Beach in order to stabilize the dune and provide more habitat for plants and animals.

However, a number of residents refused to sign the easement, which could prevent the $17 million project, which is fully funded with federal and state dollars, from taking place.