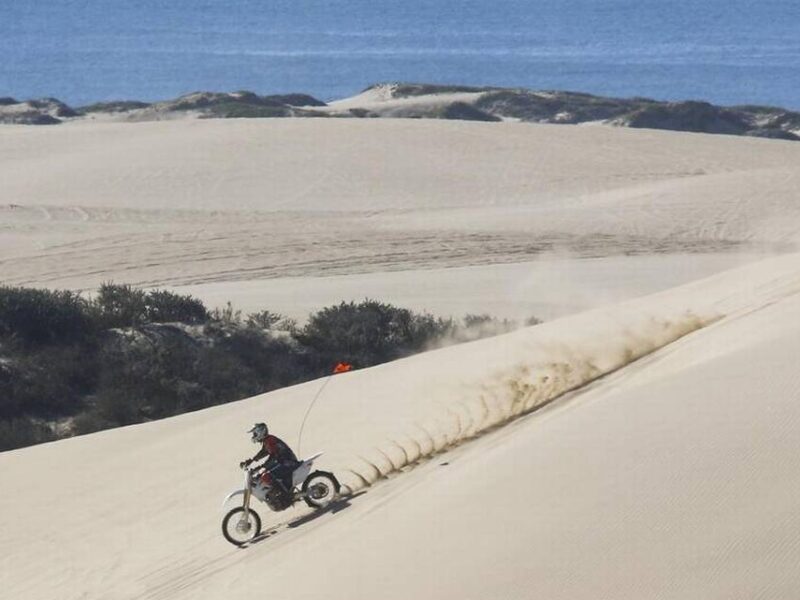 In its 181-page report, the Coastal Commission staff discuss how the development ideas in State Parks’ draft Public Works Plan — released on Dec. 31, 2020 — do not comply with the California Coastal Act or Local Coastal Programs for Grover Beach and San Luis Obispo County.

The Coastal Commission and State Parks have “not seen eye to eye” about the development and future of the Oceano Dunes, Coastal Commission staffers told The Tribune in January. The suggestions outlined in the commission’s staff report aim “to bring finality to at least 40 years of debate and discussion” on the Oceano Dunes’ operation and conflicts with the Coastal Act and local coastal programs.

The release of its report comes before the commission will hold a public meeting to discuss State Parks’ plan on March 18. The public can also submit comments and feedback on the Public Works Plan before 5 p.m. March 2.

In general, the staff report suggests that the Coastal Commission implement what it has asked State Parks to do in the past: eliminate off-highway vehicle (OHV) use over a five-year transition period; provide low-cost vehicular access and camping on the beach between West Grand and Pier avenues in Oceano; close the Pier Avenue entrance to vehicles and make “a series of changes to protect natural resources in the park,” according to the report.

“Although staff recognizes that this recommendation will require a significant shift in park operations, it will also allow for a different park experience that is itself attractive for coastal visitors and that can serve as a regional economic engine, particularly for families looking for unique lower cost recreational and outdoor opportunities,” the staff report said.

In an emailed statement sent to The Tribune on Wednesday evening, State Parks said it had received the report and was still reviewing it.

“State Parks has put out a draft long-range plan intended to help resolve decades-long challenges and conflicts over off-highway vehicle recreation at Oceano Dunes State Vehicular Recreation Area,” the statement continued. “Public comment is being accepted on the plan, and the Coastal Commission will hold a public hearing March 18. This is a question that has been debated for nearly 40 years and there are strong opinions. We’re committed to a balanced and sustainable path that supports access for all, protects the environment and reduces environmental health risks.”

Nearly the entire Oceano Dunes is designated by the Coastal Act and Local Coastal Programs as an environmentally sensitive habitat area, or, ESHA.

This ESHA designation means any activities that significantly disrupt the habitat value of an area or are not dependent on the resources provided by the local ecosystem are banned. Technically, this outlaws OHV use in the park, since it has been found to disrupt the habitat by killing federally-protected birds and grinding the sand down so it produces more dust blown in the air.

The Coastal Commission’s staff report says the OHV use in the dunes “is one of the most disruptive activities that could be pursued therein.”

Additionally, the areas where dunes have been allowed to sit dormant, free of OHV activity such as an area called the 40 Acre Area no longer emit as much dust, according to the staff report.

State Parks plans to reopen the 40 Acre Area to single-track OHV use under its new Public Works Plan.

In addition to the environmental concerns surrounding off-highway vehicle use on the dunes and beach forefront, the Coastal Commission’s staff report also looks at environmental justice and tribal justice issues caused by the activity.

“Unlike the more affluent beach communities in the area, such as Avila Beach and Pismo Beach, the residents of Oceano have no options for beach recreation free of cars fronting their community, and these residents bear the significant burden of air quality and public health problems, with little benefit from park operations.”

Many Oceano Dunes off-road riding enthusiasts say that OHV access to the dunes allows for greater recreational access to the beach and brings in tourists who spend their money in the community.

According to the report, the Northern Chumash Tribal Council indicated that it was “not adequately consulted when the initial CDP was approved and when the LCP was first certified for this area.”

“They have asked that the vehicles and OHVs that degrade this area be removed so that this sacred natural space can be honored and cherished,” the report said.

The staff report did not absolve the Coastal Commission of failing to address the tribal justice issues associated with allowing OHV use in the park.

“Rather, to date, the Commission has allowed all of the things that the tribes adamantly oppose, and have for many years,” the report said.

Could the Coastal Commission end OHV use at Oceano Dunes?

Off-highway vehicle use has been allowed at Oceano Dunes State Vehicular Recreation Area since the Coastal Commission issued the original coastal development permit to State Parks in 1982.

“The base CDP, however, only temporarily authorized such uses so that Parks would have time to explore modifications to Park operations to address coastal resource issues, including impacts to ESHA,” the staff report said.

Forty years later, and OHV use is still allowed in the park.

But the Coastal Commission essentially holds the reins when it comes to operating the park because it was the agency to issue the permit that dictates what is allowed.

“The commission has exercised its discretion not to make major changes to the CDP, in part in response to State Parks’ requests that the commission not take such actions, but instead to defer to State Parks and to allow more time for State Parks to come up with solutions,” the staff report said.

The staff report noted that the Coastal Commission has essentially let State Parks operate in violation of the Coastal Act and local coastal programs, but that it is now “time to draw conclusions, including to take final actions under the law.”

‘Staff is concerned’ about plans for vehicular recreation area

One of the first legal actions the Coastal Commission could take is to approve or deny State Parks’ draft Public Works Plan for the Oceano Dunes and Pismo State Beach.

When State Parks began its planning process about two years ago, the Coastal Commission asked it to consider phasing out OHV use over five years to comply with the Coastal Act. In its plan, however, State Parks said this would be unfeasible because OHV use brings in needed funds to support park operations, habitat restoration and conservation efforts within the dunes.

The staff report does not reject all of the ideas outlined in State Parks’ Public Works Plan. Proposed projects such as lifeguard facilities, dune boardwalks and improvements to Pismo State Beach Monarch Butterfly Grove “can likely be found consistent with” local coastal programs “in some form,” the staff report said.

But development ideas for the Phillips 66 Santa Maria Refinery property and Oso Flaco Lake Natural Area in Arroyo Grande, both outlined in the plan, “raise significant … concerns,” the report said.

The Coastal Commission’s staff report concludes that the draft Public Works Plan is “inadequate to address the range of legal and coastal resource impacts.”

The report suggests that the commissioners largely reject State Parks’ draft Public Works Plan and instead work to modify the coastal development permit issued to State Parks to eliminate OHV use over a five-year period and allow limited camping and vehicle use north of the Pier Avenue entrance to the beach area.

The report also recommends that State Parks implement changes including:

From there, the Commission would “retain oversight to ensure State Parks moves forward consistent with the terms and conditions of the updated CDP,” the staff report said.

“It will take significant work, but staff remains committed to working with State Parks to develop a modified (Public Works Plan) that addresses these issues, following commission action here on the base CDP.”