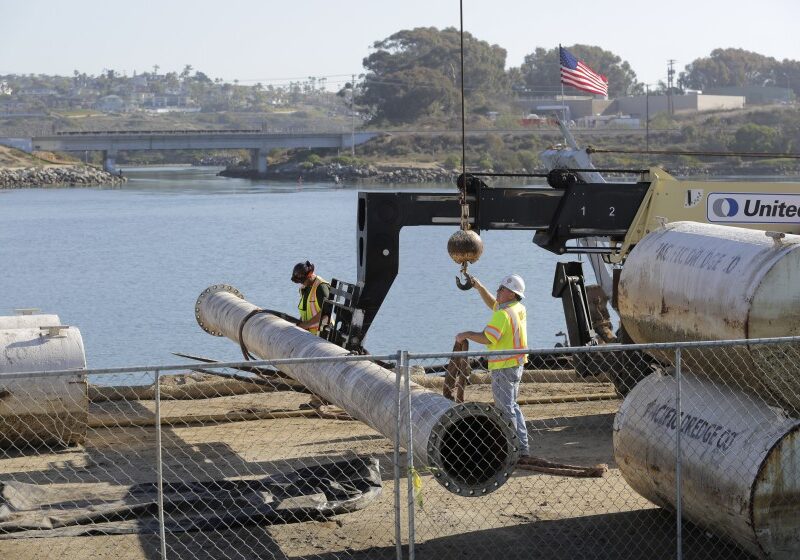 Workers move sections of pipe Friday at the western edge of Agua Hedionda Lagoon in Carlsbad in preparation for dredging to begin next week. (Bill Wechter)

Sand replenishment from the dredging of Agua Hedionda Lagoon in Carlsbad will start later and finish sooner than expected, a Poseidon Water official said.

Pacific Dredge Co. of San Diego has begun placing pipes and equipment along Carlsbad Boulevard in preparation for the work, said Peter MacLaggan, senior vice president of Poseidon, the company that owns and operates the Carlsbad desalination plant.

Originally expected to start in November or December and finish in April, dredging is now expected to get underway next week and wrap up by the end of March. However, the shortened project will not mean less sand, he said.

“We went through the competitive bid process, and we got three bids,” MacLaggan said. “One had a dredge able to move twice as much sand as the others. The smaller dredge would take two or three months, and the larger could do it in half the time.”

Scheduling the larger dredge took longer, and before the barge could be brought up from San Diego Bay, a windy January storm pushed more sand into the mouth of the lagoon.

“We had to wait for the right sequence of tides … for it to clear out naturally, and it did,” he said. The barge was maneuvered into the lagoon a week ago.

A total of about 300,000 cubic yards of sand will be pumped from the lagoon through pipes onto the beach in three places.

First the sand will be spread on what’s called the “middle beach,” which is the area between the Encina power plant outfall, also called the “warm water jetty,” and the lagoon inlet to the north at the Tamarack Beach parking lot.

Next sand will be distributed on the “south beach,” south of the warm water jetty. And last, but not least, the “north beach,” north of the lagoon inlet, will get up to 150,000 cubic yards, or half of all the sand taken from the lagoon. It’s expected to widen the beach between Tamarack Avenue and Pine Avenue, at the northern end of the seawall.

The north beach area did not get sand the last two times the lagoon was dredged, and as a result erosion has cut the coastline there to the narrowest it’s been in years. Still, because of concerns raised by the public, the north beach is capped at a limit of 150,000 cubic yards of sand from the dredging project.

One of the concerns was that winter storms could create a steep and hazardous berm if sand is too deep on the beach, MacLaggan said. Erosion sometimes creates a cliff several feet high that is difficult for people or lifeguard vehicles to cross at the high-tide edge of the surf. Another concern was that too much sand might adversely affect the waves enjoyed by surfers.

Surfing conditions will be monitored for a month before and after the dredging to see whether changes should be made the next time the work is done, he said.

The same storms that made it difficult to get the barge into the lagoon also ate away parts of the north beach to make what some say is the narrowest shoreline in years.

“In 45 years of walking on the beach in Carlsbad, I’ve never seen that kind of damage,” Beach Preservation Commission Chairman Fred Briggs said at a recent meeting.

“We don’t have a lot of beach left at high tide,” Briggs said. “My thoughts were where are we going to put 20,000 people (when visitors arrive) next summer.”

Poseidon is responsible for dredging the lagoon for the first time now that the company is using seawater to feed the Carlsbad desalination plant, which went online in 2015. Previously, the lagoon was routinely dredged by the power companies, originally San Diego Gas & Electric Company, that operated the Encina power plant, which used seawater from the lagoon for its cooling system.

The old power plant, now being dismantled, has been replaced by a new, more efficient plant that’s not cooled by seawater.

Initially, the same seawater intakes that cooled the power plant’s turbines for decades were used to supply water for the desalination plant. Poseidon is now about halfway through a two-phase project to replace the intakes with improved equipment.