Army Corps pitches storm prevention concepts, but some could cause more water to hit the Island 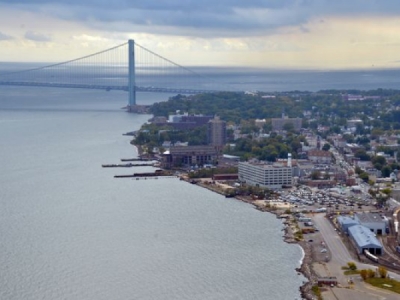 CITY HALL — As the threat of “storm of the century” looms, the Army Corps of Engineers is trying to figure out how to get the New York and New Jersey region ready, but some of those ideas could potentially cause more water to actually hit Staten Island.

Representatives from the Army Corps of Engineers paid a visit to the Island’s Snug Harbor Cultural Center and Botanical Garden recently to show residents five conceptual plans that would protect the region from the next storm.

But they said at least two of the five options they are currently considering could adversely effect the Island.

One of the options includes building a combination of a levee, berm and serge gate barrier system between Sandy Hook, New Jersey and Breezy Point at the Rockaway peninsula in addition to another barrier along the East River west of Throgs Neck.

This concept would be the largest and also most expensive with the potential to span over 30 miles and cost $118.1 billion.

This option, while protecting large section of New York and New Jersey coastline could result in a build-up of flood waters on Staten Island.

The second option that could potentially harm Staten Island envisions surge gates built between the Verrazzano-Narrows Bridge and Brooklyn and another gate at Throgs Neck. This concept is expected to cost $47.1 billion.

Project Manager with the Army Corps of Engineers Bryce Wisemiller, said the agency is aware of the potential of these two concepts to actually back water up toward Staten Island and are looking into how to address these concerns.

“We are looking at that further and to the extent that there is anything like induced impacts that would have to be mitigated as part of that alternative,” Wisemiller said. “So, we’d have to figure out what that mitigation would be whether it would be building the seawall higher, different areas, extending it, and those types of mitigation would have to be done before the barriers could be built so you wouldn’t have those impacts.”

Wisemiller said they plan to address those issues this year in as much detail as they can.

But Army Corps representatives said at least 72 percent of the people they surveyed also expressed concern about induced flooding as a result of certain barriers.

They also said ultimately Congress will have the final say in which plan it wants to support but that there is also the potential to develop a locally preferred plan if the two states and cities want different plan concepts.

The study will continue through 2022, and Army Corps said construction may not begin until 2030.

The Army Corp’s visit to Staten Island came about a week after President Donald Trump signed a bill into law that was the final step before construction starts on a seawall along Staten Island’s East Shore.

The project is one of the most significant and costly measures aimed at protecting the borough from future storms.

The barrier will stretch from Fort Wadsworth to Oakwood Beach and includes a buried seawall with a raised promenade through a portion of Miller Field.

Option “3B” would cover multiple bays, rivers, creeks and shorelines. It would include a dual surge gate system at the southern mouth of the Arthur Kill as well as at the eastern mouth of the Kill Van Kull between Bayonne, New Jersey and Staten Island.

This concept would also include multiple surge gate structures in southern Brooklyn to Jamaica Bay and to the Rockaway Peninsula.

The Army Corps expects this concept to cost $43 billion.

The Army Corps anticipates this option would cost $32 billion.

Option “5” includes strengthening perimeter shoreline measures in the Hackensack Meadowlands, New Jersey shoreline along the Hudson River, lower West Side of Manhattan, East Harlem in Manhattan along the East and Harlem Rivers, and Long Island City and Astoria in Queens.

The Army Corps expects this option would cost $14.8 billion.