Whitesands Scheme on the Table 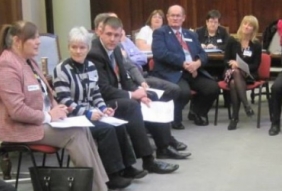 At the meeting of Environment, Economy and Infrastructure committee, set for November 10, Dumfries and Galloway Councillors will be asked to consider the next steps for the Whitesands project and agree a preferred option for a flood protection scheme.

The Council has been consulting on the project since 2012 and a further round of public consultation took place during October.

This included meetings with interest groups, an open public event in the former Baker’s Oven shop in Dumfries High Street, a presentation to Nithsdale Area Committee and a survey.

Chairman of the Environment, Economy and Infrastructure committee, Councillor Colin Smyth, said: “Councillors have consistently voted unanimously in favor of investing in a solution for the Whitesands. The Scottish Government has also made clear that it will prioritize tackling the problem of flooding on the Whitesands. After all, Dumfries is the largest town in Scotland that still floods on a regular basis but doesn’t have a flood protection scheme.”

Following analysis of the feedback, the results will be presented to the committee.