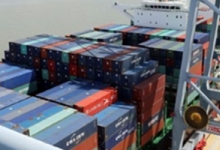 The department has asked the to approve the project. Funds would come from the state budget and other sources.

The Cai Mep – Thi Vai Passage runs through in – Vung Tau Province; and Phuoc An Districts in ; and of .

According to figures released by (JICA), the volume of cargo to be transported through the Cai Mep – Thi Vai Passage is estimated to be 16.8 million tonnes and 26.8 million tonnes by 2010 and 2020, respectively.

However, the volume of cargo handled at the ports and transited in the region in 2010 amounted to 124.4 million tonnes, exceeding JICA’s forecasts more than 2.5 fold, according to the Shipping Department.

The department said that it was urgent to create new maritime safety measures and develop the Cai Mep – Thi Vai Passage. — VNS