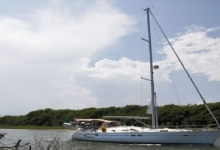 It’s a start. A belated start, and only a small step toward the finish line, but a start.

With $2.4 million in federal funds recently made available to the , the stretch of the Intracoastal Waterway between the and the Isle of Palms Connector will soon be dredged.

Experts say that area is among the worst along the ever more shallow 1,200-mile waterway. It has become a safety hazard as well as a navigational and economic problem.

Sand has built up in that part of the channel so much that it is only two feet deep at low tide.

That is a fraction of the 12-foot minimum prescribed by the federal government. It will not accommodate most boats, so many boaters — commercial and recreational — go offshore to avoid it. When they do that, boaters lose time and convenience.

And even after the stretch from to the Isle of Palms is dredged, waterborne commerce could be compromised because of shallow spots elsewhere. If the waterway becomes unusable, Charleston’s supply of fuel, building materials and transit-boat business will suffer.

The shoaling should never have gotten this bad. The federal government is responsible for keeping the waterway navigable, and it has failed for years to do so adequately.

Indeed, a change in federal policy in 2001 has meant far less money for dredging the waterway.

The formula introduced that year determines which places to dredge based on only commercial traffic, not recreational. Both are economic engines and need to be recognized as such.

The Isle of Palms has warned boaters to use caution in the waterway, particularly at low tide. Unsuspecting pilots have run aground in shallow water and caused injuries.

Keeping the navigable is expensive. Several years ago the Corps estimated it needed $100 million in work.

Nevertheless, like deteriorating roads and bridges, it should be brought up to speed and then maintained regularly so that it doesn’t get to this dangerous point again.

After nearly two years, the realignment of the Hatteras to Hatteras Inlet Channel has been approved, which means that federal dredging can now occur throughout the entire horseshoe route in Hatteras Inlet. An Environmental Assessment and Finding of No Significant Impact was signed on November 30 by Robert M Burnham, LTC, U.S. Army, acting district commander for… Read More

Three Massachusetts organizations will receive more than $4 million for projects to restore salt marshes and increase coastal resilience. The grants, from the public-private National Coastal Resilience Fund, were announced Tuesday as part of more than $136 million for 88 projects nationwide, including 12 in New England. Established in 2018, the Fund invests in conservation projects that restore or… Read More

Norfolk Dredging Co., Chesapeake, Virginia, was awarded a $19,713,950 firm-fixed-price contract for maintenance dredging. Bids were solicited via the internet with five received. Work will be performed at Naval Station Mayport, Florida, with an estimated completion date of July 27, 2023. Fiscal 2023 civil construction funds in the amount of $19,713,950 were obligated at the… Read More

IHC Dredging and Cochin Shipyard have signed an agreement for a design and engineering, hardware and support package for the licensed construction of a Beagle® 12 trailing suction hopper dredger (TSHD). The TSHD will be built by Cochin Shipyard for the Dredging Corporation of India (DCI). With the construction of this Beagle® 12, a high-capacity dredger (12,000… Read More

This year’s hurricane season — which ends Wednesday — has once again reminded us of the risk of living on Florida’s shifting shorelines. Driving the news: Coastal erosion from crisscrossing hurricanes Ian and Nicole has homeowners and coastal communities, like Treasure Island’s Sunset Beach, scrambling to rebuild seashores, even as the demand for sand rises and prices… Read More