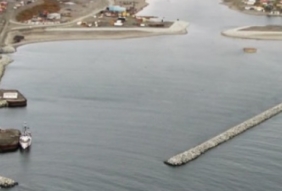 US Army Corps of Engineers suspended for 1 year works on building the first deep-water port in Arctic. The decision was taken after Royal Dutch Shell announced termination of the exploration works on the shelf of Alaska. The experts of US Army Corps of Engineers, together with representatives of the administration of the State of Alaska studied the possibility of building deep-water port in the harbor of Nome, which will be able to accommodate ships with deep draft, engaged with offshore drilling for oil and gas Arctic shelf. According to the plans the dredging works, would allow berthing of vessels with draft of 8.50 m.

“During the next 12 months, the US Army Corps of Engineers and its partners will monitor the activities in the Arctic, in order to determine whether there is a possibility, need and interest of the federal authorities to built the deep-water port in Nome”, said in a statement Corps of Engineers.