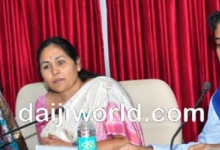 vigilance and monitoring committee held a meeting on Friday June 26 under the chairmanship of , Udupi-Chikmagalur MP, at Zilla Panchayat meeting hall, Rajathadri, .

Speaking at a press meet, Karandlaje said, “The officials are ignoring their duty in following up on approval of proposals and usage of funds. The central government has released Rs 6 crore for Kadikanyana and Rs 2.25 crore for dredging work but the project is awaiting a cabinet order. The Marvanthe break water construction will be completed by the end of March 2016. The vaccination programme for cattle will start from August 1. The multi-village drinking water project was completed at . Nearly Rs 2.96 crore was released in the first phase and in the second phase a proposal of Rs 5 crore is under process at panchayat.”