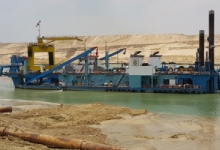 The $1.5bn (EGP11.75bn) project was undertaken by the Challenge Consortium, an NMDC-led collaboration that also included , , and . News of the completion was announced following a successful trial run of the canal, which took place on 25 July, 2015.

At the launch of the project, Egypt’s President stipulated that the implementation period should be reduced from three years to one, representing a significant challenge for NDPC and the Challenge Consortium