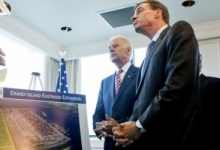 By Lauren King, The Virginian-Pilot

The U.S. Army Corps of Engineers will have a change of command this week in the Norfolk District.

Col. Jason Kelly will take command from Col. on Thursday morning, according to a news release.

Olsen has been the district commander since March 2012. In the June 2015 Maritime Bulletin, Olsen said the district has made significant progress.