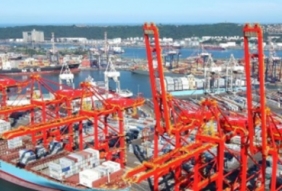 Port of Durban Harbour Master, Captain Alex Miya, has reinstated a number of berths in the port back to their original permissible draughts. This follows Transnet National Ports Authority’s ongoing efforts to address shallow spots exacerbated by the size of megaships now calling at the port.

Durban Port Manager, Moshe Motlohi, explained: “The vessels calling at our ports have gotten bigger and therefore require deeper draughts. But they also cause challenges for ports because of the manner in which they more aggressively displace material from the sea bed, thus causing shallow spots. Shallower berths can cut into the vessel payloads of ship owners because it means they cannot sail into the port with their vessels fully laden and have to wait for high tide to sail or berth.”

Recently four container berths out of eight at Durban Container Terminal – namely 107, 200, 202 and 205 – have been called back to their original permissible draught of 12.2 metres.

Berth P at the Point Terminal, Berth MW9 at Maydon Wharf Terminal and bulk Berth BCA 4 in the Island View precinct have also been called back to their permissible draughts of 10.3m, 9.3m and 10m respectively.

“We are also expecting engineering sounding results that are likely to indicate more berths will be called back to their permissible draughts,” said Motlohi. “Ultimately the safety of vessels must take priority for us as TNPA, which is why the Harbour Master took the safety precaution to review the permissible draughts of some berths earlier this year.”

The permissible draught is the vertical distance between the sea bottom and the lowest part of the ship’s underside, otherwise known as the under keel clearance. In Durban it allows a 600mm clearance to minimise the chance of the vessel running aground in that area.

TNPA is pursuing various interventions to address the issue of diminishing draughts. The authority is continuing with maintenance dredging and pushing forward its R 2 billion dredging fleet replacement programme.

While the Impisi plough tug continues to dredge in the port, the short term plan is for the Italeni grab hopper dredger to continue to dredge along the berth pockets of Durban Container Terminal. Italeni will remain in Durban until the port takes delivery of a hired dredger dedicated to its dredging needs.

TNPA will also be taking delivery of its new Ilembe suction hopper dredger in December 2015. The Ilembe will be used for dredging larger areas such as the entrance channels.

TNPA has also received approval to build a new grab hopper dredger dedicated to the port which should be delivered by the end of 2016.

The long-term intervention will be TNPA’s project to deepen and lengthen the berths to cater for the bigger vessels now calling at the port. This project is expected to commence in 2016. Lengthening of the berths will allow the Port of Durban to berth three big vessels versus the two it is currently accommodating. This will immediately reduce the number of vessels waiting at anchorage, thereby improving port turnaround time. The other benefit is that the port will cease to be a tidal port, so that berthing and sailing will no longer depend on high tide. This will optimise the capacity of the port and improve the total vessel stay in South African waters.

The challenges presented by megaships calling at ports is presently a global phenomenon, as highlighted in a recent report by the International Transport Forum, which said “mega-containerships contribute to congestion and add to the need for costly infrastructure upgrades (bridge height, river width/depth, quay wall strengthening, berth deepening, canals/locks and port equipment)”.