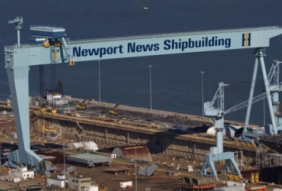 Topping the list was a $57.8 million contract awarded to Newport News Shipbuilding for maintenance and upgrades to the USS Columbus, a Los Angeles-class submarine. The contract includes options that, if exercised, would bring the total contract value to $288.6 million.

The Newport News shipyard, a division of Huntington Ingalls Industries, is one of two yards that build nuclear-powered submarines for the U.S. Navy.

– BAE Systems Norfolk Ship Repair received two contract awards in August for work on destroyers: $22.5 million for the USS James E. Williams, and $12.4 million for the USS Oscar Austin. In both cases, the primary focus is structural repairs and other upgrades.

– Seaward Marine Services, Norfolk, also received two awards for the month: $9.5 million and $7.5 million, both for hull cleaning and associated work on the underwater portion of ships. Work will be performed at various locations around the world and is expected to be completed by February 2016. Both amounts are additions to previously awarded contracts.

– Norfolk Dredging Co., Chesapeake, received a $13.3 million contract for Prime Hook beach restoration in Prime Hook, Del. The contract was awarded by the Army Corps of Engineers with an estimated completion date of May 2016.

– The Whiting-Turner Contracting Co., Baltimore, received $16.8 million to relocate Gate 6 at Naval Station Norfolk, plus work involving roadways and utilities. The relocation was prompted by work on Interstate 564.

– Marton Technologies Inc., Newport News, was awarded $9.3 million for logistics-related work at Fort Riley, Kan. This is an addition to a previously awarded contract.

– SimIs Inc., Portsmouth, was one of five firms awarded a $49.7 million contract from the Army for software development. The estimated completion date is August 2020.

The information comes from the Defense Department, which every business day publishes contract awards of $6.5 million or more.