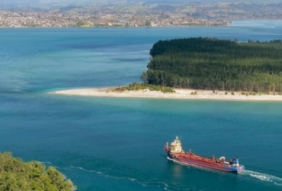 After court battles lasting more than four years, the New Zealand port of Tauranga is widening and deepening its shipping channels from 12.9 m to 14.5 m inside the harbour, and 15.8 m outside.

The work is being carried out by Danish dredging contractor Rohde Nielsen and is the final building block in the port’s five-year, NZ$350 million (USD225 million)capital expenditure programme designed to turn Tauranga into a big-ship-capable hub.

Speaking to IHS Maritime, a Rohde Nielsen representative said, “Some 5.5 million m³ of material will be dredged by trailing suction hopper dredgers (TSHDs) during the channel deepening and widening project. It will be placed at a designated disposal site about 2 nm southeast of the entrance channel and we have developed a project-specific disposal strategy in order to achieve an ideal distribution of the material throughout the disposal site.”

IHS Maritime asked if there were any special project challenges.

“We anticipate our challenges to be that Tauranga is a busy port with heavy traffic. Further, and due to the geographical nature of the area, which causes a bottleneck effect, we will have to contend with major currents in the dredging areas.

“That said, Rohde Nielsenhas built up a healthy experience of similar projects worldwide – and as we have an office in Newcastle, Australia, we won’t be that far from ‘home’.”

The first of the two TSHDs Rohde Nielsen will deploy, the 2,150 m³ Brage R, started work this week It will be joined by the larger 6,000 m³ Balder R later this year. Dredging is scheduled for completion by August 2016.

Port of Tauranga consultant Tony Reynish told IHS Maritime that the overall NZ$350 million expansion programme, “Is to prepare the port to handle a larger generation of container ships. The investment comprises two new 74-tonne bollard pull tugs, four ship-to-shore [STS] gantry cranes, additional straddle carriers, and a 170 m extension of the Tauranga Sulphur Point container terminal wharf. It’s complete except for two of the four STS cranes, which are on order and scheduled for commissioning in December 2016.

“There is also expansion into New Zealand’s South Island at Timaru and Rolleston – just south of Christchurch – to encourage the aggregation of cargo at Tauranga to support bigger ships with the deepening and widening of our shipping channels.

“The dredging work is programmed to be carried out in two stages,” he added. “The first stage, which is now under way, is designed to allow us to handle 6,500 teu vessels, which contrasts with an average of 4,500 teu vessels now. Maximum draught at low water will be 13.2 m but the average tidal range is 1.5 m, allowing potentially for a higher draught.

“The second stage will accommodate 8,200 teu ships up to 347 m long and a low water draught of 14.5m – it’s designed to future proof the port for the next 15 to 20 years. The decision to proceed with the second stage of the dredging will be driven by further container growth and the requirements of major shippers and shipping lines operating through the port.”

That might happen sooner rather than later. As Reynish pointed out, “Over the past five years, total trade has risen by 47% with containers up 66%. Container trade is anticipated to rise to a million teu over the next two years, an increase of 17%.”

Port CEO Mark Cairns made the point that the work was essential if New Zealand was to keep building export capacity as the government wanted, but while exporters applauded Tauranga’s expansion, they made the point that it had already taken too long.

At a press conference, New Zealand Shippers Council chairman Mike Knowles said, “For Tauranga it has taken four years just to get consents approved. Port Chalmers has had the same problem, and they have paid quite a few million dollars in costs as well.”

The process is too slow, he said, especially with a widened Panama Canal due to send ever-bigger ships into the Pacific Ocean.

Tauranga and Otago are not alone in facing this challenge. The port of Wellington is preparing to apply for dredging consent, and Ports of Auckland last dredged its channel in 2006…

Cairns agreed, “It [Tauranga’s application to dredge] went through independent commissioners, but was then appealed by three appellants. We had various Environment Court sessions, and Environment Court-mandated mediation, that was then appealed to the High Court , which knocked it out. One appellant then sought leave to go to the Court of Appeal, which the High Court stopped.

“It’s a critical piece of infrastructure,” Cairns added. “For something that is so important for a trading nation like New Zealand, we need a more efficient process to enable these consents to be granted.”

New Zealand Trade and Enterprise Board director Charles Finny said the country, not just its ports, needed to be ready for a major increase in cargo volumes.

“The government has a target of increasing the export to GDP ratio to 40%, and that is going to mean a doubling of exports,” he said. “As the economy grows there is going to be an increase in imports as well, which means increasing pressure on road and rail links, along with coastal shipping.”