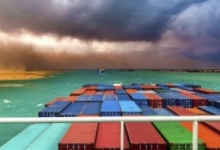 After work began around 10 months ago on the Suez Canal expansion, the US$8 billion project is due to open on August 6, 2015, around 6 months ahead of the Panama Canal expansion’s anticipated completion date in early 2016, according to Reuters.

PTI previously reported that the Suez Canal would be opening in July, 2015, but now the official opening date has been announced a few weeks after originally planned.