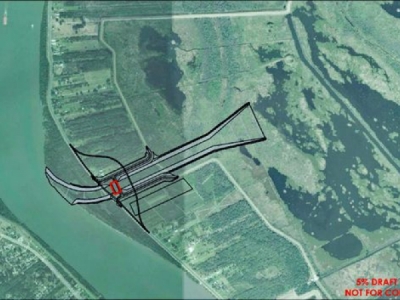 A new joint venture company made up of national construction firms with a history of building levees and bridges in Louisiana has been selected by the state coastal authority to oversee construction of the proposed $800 million Mid-Breton Sediment Diversion in Plaquemines Parish.

“This competitive process produced three quality proposals from experienced local and national firms that all have a strong presence in Louisiana,” said CPRA Executive Director Bren Haase, in a news release announcing the contract. “The state is confident LDC brings the necessary experience and team members needed to construct this transformational restoration project.”

The Mid-Breton diversion will be built on the east bank of the Mississippi River at Will’s Point, about 68 miles above Head of Passes. It will be designed to capture sediment rich water from the Mississippi and move it eastward into the Breton Sound Basin to restore wetlands.

In documents provided by the state in October to LDC and other companies bidding on the project, CPRA officials estimated that construction would begin in October 2023 and be completed by June 2028.

LDC will begin with a $12.4 million contract with the state to design temporary works, review the constructability of the diversion structure and estimate project costs for designs being prepared by another team of contractors led by Stantec Inc.

Stantec, based in Edmonton, Alberta, was selected by the state in February 2018 to lead the design team.

Once the structure’s design is complete, LDC will negotiate the price of construction with the CPRA, and if those negotiations are successful, will be awarded a final construction contract.

The firm is being hired under the state’s “Construction Management At-Risk” rules for major infrastructure projects, which brings the construction contractor into the project’s development process early in its design phase, with a focus on both speeding construction and reducing costs.

“Using the CMAR method of project delivery brings the construction contractor to the table during the design phase of the project,” said CPRA diversion program Brad Barth in the news release. “This early collaboration between the contractor and designer provides a unique opportunity to reduce project time, costs and risks.” “While the CMAR delivery method hasn’t been used often in Louisiana, it gives us the best opportunity to construct this large and complex project in the safest and most cost-effective manner,” said Chip Kline, chairman of the CPRA board of directors and coastal adviser to Gov. John Be. Edwards, in the news release. “We’re in a race against time, and CPRA is committed to finding innovative and ambitious solutions to address Louisiana’s coastal crisis.”

The losing bidders were Mid-Breton Constructors, made up of AECOM Energy & Construction Inc. and James Construction Group, LLC; and Kiewit.

All three of the teams included numerous subcontractors in their bids to the state for the contract.

Members of the LDC have worked on a number of major local projects, including the Lake Borgne Surge Barrier in New Orleans and St. Bernard Parish; the West Closure Complex in Plaquemines and Jefferson parishes; the three Permanent Canal Closures and Pumps stations in New Orleans; the Chalmette Levee Loop levee and floodwall project in St. Bernard; and the widening of the Huey P. Long Bridge in Jefferson Parish.

Both the Mid-Breton and Mid-Barataria sediment diversions are receiving their initial financing from grants provided by the National Fish and Wildlife Foundation. The grant money comes from payments made by BP and Transocean to settle criminal charges stemming from the 2010 BP Deepwater Horizon disaster and oil spill.

Construction of the $1.4 billion Mid-Barataria Sediment Diversion, proposed for a location just south of Myrtle Grove on the west bank of the river in Plaquemines Parish, is expected to be completed sometime in 2021.

The two diversions are designed to mimic the historic role of the Mississippi in building wetlands when it overflowed its much lower natural banks during high water periods. Construction of levees along the river from New Orleans’ West Bank through Plaquemines Parish has cut off that historic supply of sediment, as has the controlling of the river’s mouth with jetties since the 1880s. The jetties are designed to keep the mouth free of shoaling that blocks shipping, and directs sediment into deepwater areas of the Gulf of Mexico.

Both diversions must still undergo a complex environmental review process that is in part aimed at concerns raised by oyster farmers, shrimpers and other fishers about the effects of fresh water on their catches in the future, once the projects begin operating.

State officials also are looking into ways to mitigate those and other potential effects of the projects, such as possible increases in floodwaters during storms that occur when the diversions are operating.