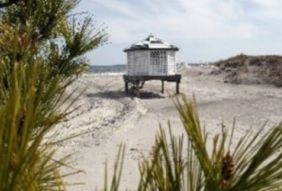 Days after a weekend nor’easter pummeled the New Jersey coastline, state officials on Thursday filed among the first of what is expected to be hundreds of legal actions to take beachfront property to build protective dunes.

The action, filed in Superior Court in Atlantic County, seeks access to all city-owned property east of the Margate bulkhead between the towns of Ventnor to the north and Longport to the south.