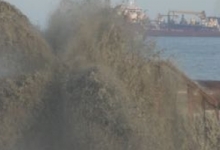 The south end beach replenishment project in will be at standstill for six to eight weeks as the hopper dredge that has been pumping new sand gets a new engine, the Army Corps of Engineers reported on Wednesday.

The engine on the Liberty Island was “totaled,” according to Army Corps of Engineers spokesman Richard Pearsall. The ship is at port in , as it awaits a replacement engine.