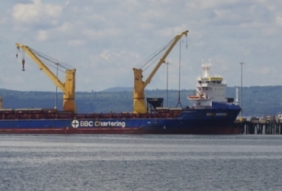 The BBC Amber is at the dock on an early August afternoon, unloading wind turbine tower segments bound for the Passadumkeag Mountain wind project in Grand Falls Township, 70 miles to the north.

At 14,000 tons, it is a relatively small vessel, drawing just 24 feet on arrival, and was able to transit the channel to the Searsport, located at the head of Penobscot Bay, without concern for the 10-foot tides or high spots, where as much as 4 feet of silt has fallen into the channel since it was last dredged a half-century ago. But on both the day before and the day that followed, two 23,000-ton oil tankers had been forced to wait for a rising tide to proceed into the port, where oil, gasoline, road salt, wood pulp and other cargo is offloaded, much of it bound for the landlocked interior.