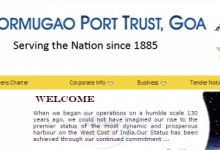 ASCO: Mormugao Port and Railway Workers Union (MPRWU) and Goa Port and Docks Employees Union (GPDEU) have threatened to launch a mass protest and stop operations at Mormugao Port Trust (MPT) if the latter proceeds with the proposal to dredge the MPT channel to service vessels.

The unions stated that South West Port Limited (SWPL) moved the proposal to deepen the channel from 1.40 mts to 18.5 mts. It was later suggested that the same should be under PPP. However, without taking any consensus from the Board, the Joint Secretary (Ports) in consultation with the (DEA) finalized the PPP project. The cost for dredging was estimated at Rs 530 crore and later re-estimated at Rs 301 crore.
MPRWU president A stated, “From seeking consultation to the appointment of consultant as transaction advisors – the entire process was completed. However, the consultant allegedly prepared the report without proper studies. It was more surprising to note that no such projects exist anywhere in the world. This may be the biggest scam in the history of the country’s port sector.”

He continued, “It was also surprising to note that DEA changed the PPP model to annuity model, thereby transferring the project’s risk from PPP operators to MPT. Also, MPT is facing problems while paying salary, wages and pension since mining was stopped in Goa. Deepening of the channel will not yield results, and will pose a threat to the coasts of and Mormugao. [H]