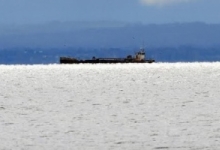 An appeal against an order to stop Lough Neagh sand extraction could end up costing the companies involved £250,000.

Five sand companies and the Shaftesbury estate, which owns the bed of the lough, are challenging an order from the Environment Minister to stop the dredging. It could cost each of them £40,000, according to a report by the BBC.

Mark H Durkan had given the companies involved until June 30 to cease work but they lodged an appeal against his decision on June 29 – meaning they can continue work until the case is heard.

The ‘MAIL’ reported in May on claims how the Environment Minister had failed to protect Lough Neagh from ‘illegal sand extraction’. Soon after, the Minister served a notice on companies taking sand from the lough ordering them to stop. The dredging had no planning permission and was taking place in a bird habitat with European protection.

The Green Party and Friends of the Earth spoke out against the extraction and a complaint was lodged with the European Commission.

Documents lodged at the Planning Appeals Commission show that the Shaftesbury Estate has four grounds of appeal. They include that the dredging complies with existing European and domestic legislation, including environmental law. It claims the requirement to cease within a day of the departmental enforcement notice coming into effect was “manifestly unreasonable”.

The estate says that would have “catastrophic implications” for the construction industry, which relies on the sand. The sand companies are also claiming the enforcement notices were “not served as required by law”. The DOE’s own checklist spells out the likely environmental effects of the project that must be considered. These include disturbance of the sand bars, the extent to which suction dredging creates craters in the bed of the lough, and the impact on fish and other species.

It also references the impact of wash from barges on wildlife and other users of the lough.