Rock wall removal could cause shoaling in shipping channel, some say 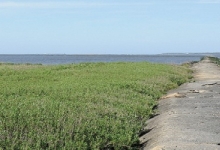 A rock wall that has protected the channel from shoaling for more than a century could be removed if a bill sponsored by state Sen. Michael Lee passes the General Assembly.

Senate Bill 160 contains a variety of provisions to fund maintenance and dredging of inlets and navigation channels, but it also would remove a massive dam known as The Rocks, which facilitated the closing of a rapidly migrating inlet that sent silt and sand into the main navigation channel.