River Hamble Survey on the Way 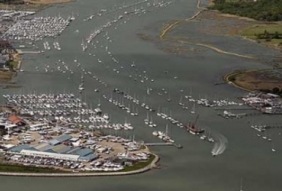 The survey is carried out to help the River Hamble Harbor Authority to maintain its knowledge of the water depths within the river and to capture any morphological changes that might be occurring over time.

ABPmer has been undertaking hydrographic surveys of the river annually since the 1990s which nominally covers the area from the harbor entrance to the tidal reaches at Curdridge and Botley.

Different sections of the river are surveyed on a rolling program ensuring that all areas of the Harbor Authority’s jurisdiction are covered at least every 5 years. The decision on which stretch to be surveyed in any one year is determined by the requirements of the Hamble Harbor Master.

“The surveys were originally carried out in the early summer months, however over the years, as the numbers of vessel movements have increased during this period they have been undertaken on spring tides during the autumn equinox,” said Claire Brown, ABPmer Head of Data.

Surveying at this time of year not only provides a clearer waterway within which to work but also enables the area of survey coverage to be maximized with access to the river margins as well as the main channels.

After nearly two years, the realignment of the Hatteras to Hatteras Inlet Channel has been approved, which means that federal dredging can now occur throughout the entire horseshoe route in Hatteras Inlet. An Environmental Assessment and Finding of No Significant Impact was signed on November 30 by Robert M Burnham, LTC, U.S. Army, acting district commander for… Read More

Three Massachusetts organizations will receive more than $4 million for projects to restore salt marshes and increase coastal resilience. The grants, from the public-private National Coastal Resilience Fund, were announced Tuesday as part of more than $136 million for 88 projects nationwide, including 12 in New England. Established in 2018, the Fund invests in conservation projects that restore or… Read More

Norfolk Dredging Co., Chesapeake, Virginia, was awarded a $19,713,950 firm-fixed-price contract for maintenance dredging. Bids were solicited via the internet with five received. Work will be performed at Naval Station Mayport, Florida, with an estimated completion date of July 27, 2023. Fiscal 2023 civil construction funds in the amount of $19,713,950 were obligated at the… Read More

IHC Dredging and Cochin Shipyard have signed an agreement for a design and engineering, hardware and support package for the licensed construction of a Beagle® 12 trailing suction hopper dredger (TSHD). The TSHD will be built by Cochin Shipyard for the Dredging Corporation of India (DCI). With the construction of this Beagle® 12, a high-capacity dredger (12,000… Read More

This year’s hurricane season — which ends Wednesday — has once again reminded us of the risk of living on Florida’s shifting shorelines. Driving the news: Coastal erosion from crisscrossing hurricanes Ian and Nicole has homeowners and coastal communities, like Treasure Island’s Sunset Beach, scrambling to rebuild seashores, even as the demand for sand rises and prices… Read More