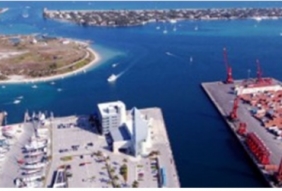 Federal funding for a proposed plan to dredge and expand the Port of Palm Beach remains unavailable more than a year after U.S. Representative Lois Frankel told U.S. Army to withhold the money.

Tim Murphy, deputy district engineer of the U.S. Army Corps of Engineers, told the port commission last week that the funding remains on hold until the port achieves community consensus on the proposed dredging and expansion.

The eclectic mix of opponents of the plan include residents of the Town of Palm Beach, recreational snorkelers and divers, fishing fans and environmental activists.

Peyton McArthur, one of the port commissioners, said the hold on federal funding removed any motivation for the port’s opponents to negotiate an agreement on a dredging and expansion plan.

“If I were the Town of Palm Beach, or if I were another entity that wanted no dredging under any circumstances, Lois [Frankel] just gave me a trump card,” McArthur said.

In a letter she wrote in June 2014, Frankel asked Jo-Ellen Darcy, assistant secretary of the Army, that $88.6 million of federal funding be withheld from the Port of Palm Beach for its proposed dredging and expansion project, which would deepen the port’s harbor to 39 feet.

The port should stop pursuing the project, said Lisa Interlandi, an attorney who represents the Sierra Club, the Florida Wildlife Federation and the Center for Biological Diversity.

She said the port’s expansion project would harm to marine life near historic Peanut Island, and that sediment and turbid water could drift as far north as MacArthur Beach State Park.

Captain Reid Hansen, one of five harbor pilots at the Port of Palm Beach, said safety is a concern because the 400-foot-wide channel leading to the port narrows to 300 feet, hindering the maneuverability of large ships.