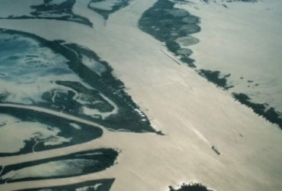 By Amy Wold, The Advocate

More than 20 million cubic yards of sediment, enough to build 2,000 acres of land, was taken from the bottom of the Mississippi River and pumped into wetland areas along the lower channel — a record amount of dredged material moved to marshes in a single year.

While that doesn’t mean 2,000 acres were formed because some of the land remains under water, it does represent a significant addition to a rapidly eroding lower river marsh land, navigation representatives say.

“The state master plan doesn’t have any projects in this area so we’re kind of left to our own devices to protect the channel,” said Sean Duffy, executive director of the Big River Coalition. “We’re the only game in town.”