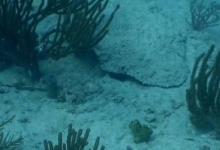 In a series of letters and emails with the , which is overseeing dredge work, the warned between February and June that damage “greatly exceeds” what was anticipated, risking harm to a stretch of reef on the south and north sides of Government Cut up to four times the size originally projected. Yet efforts to get an accurate take on damage have been rebuffed by Corps officials. And Fisheries Service divers hoping to survey the area have repeatedly encountered obstacles, they complained.