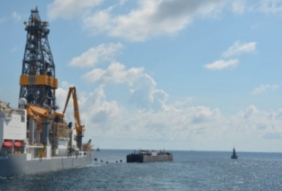 The next 5 years at the Port of Gdansk will see the implementation of the largest ever investment program, in terms of both scope and expense, says PGA.

The program will include strategic development for the Port of Gdansk estimated at 500 million PLN as well as investment to meet the current requirements of the port totaling 342 million PLN. Naturally, the realization of some of the work will ultimately depend on the decision to grant EU funds. However, it is assumed for the moment that the most costly period of the investment will be between 2017-2019. During this three year period, nearly 600 million PLN of investment can be expected.

Some of the investment projects are already underway, such as the expansion of the intermodal container terminal at the Szczecinskie Quay, which by the end of this year will have standardised the handling capacity of the terminal (i.e. storage, handling and loading).

Investment work is also in progress at the Oliwskie Quay, which will be thoroughly modernized both on land and in water. On the right bank of the port, by the Coal Pier, investment is currently ongoing to strengthen 24 hectares at the base of the basin used by the largest ships calling at the port to charge coal cargo. However, the investment process is being conducted in such a way so as not to interfere with the operation of the pier or obstruct the handling berth.

The electricity and power infrastructure at the port is also being modernized. The increasing demand for power supply at the port, the growing number of customers, and finally the expansion of the terminals located in the Outer Port, necessitated the modernization and improvement of this infrastructure. To this end, the Port of Gdansk has undertakena difficult investment requiring medium voltage cabling to be installed under the port channel in order to link the energy systems on both sides of the Dead Vistula. In addition, the investment includes upgrading the systems for securing and controlling the Main Switching Station in the Outer port, the substation and the MV grid. As a result, the project will contribute to an improved efficiency of 30MW for the electricity supply at the port.

These are just a few of over 100 investment projects planned for the current year.

The port still has many planned investment projects for the future, but among them the two largest in terms of scope are the modernization of the fairway in the Inner Port and the road and rail networks in the Outer Port.

The first project, worth nearly 500 million PLN will include the reconstruction of 16 quay sections at the Inner Port with a total length of 5.8 km and the deepening of the whole port channel, which aims to improve navigation conditions in this part of the port. The outcome of the investment will be a 90-metre-wide fairway in the Inner Port with a depth of 12 m, ensuring efficient and safe navigation between the port entrance to the turntable at Stocznia Remontowa. Further on, in the so-called Kashubian Channel, navigation conditions will be slightly different with a track width of 75 meters and a depth of 10.8 m. Thus, in both parts of the track maximum permissible parameters of vessels will be 250 m long from the entrance of the port to the Kashubian Channel and to 190 meters in the Kashubian Channel.

The Inner Port is a very important part of the port, which each year services around 2000 merchant ships, not to mention at least another thousand vessels which call at the port for other purposes or in transit. The Inner Port is also a key area from the point of view of ensuring a universal range of services. For example, last year nearly 70 different types of goods belonging to each of the six main cargo groups were handled here. This totalled 7.5 million tonnes in volume, nearly one quarter of the annual tonnage record for the whole port.

The most developing part of the port is the Outer Port. Increased transshipment (nearly 25 million tonnes of goods in 2014), the ongoing expansion of the terminal and the planned construction of new ones, naturally createda need to ensure the development and modernization of road and rail access infrastructure. The investment will include the construction and reconstruction of streets with a total length of 7.2 kilometres and rail tracks with a total length of 10 km. The total value of all works involving the Port of Gdansk Authority, covering an area of approx. 70 hectares, has been estimated initially at 110 million PLN. Moreover, the investment will cover another 29 hectares for similar works on adjacent urban areas and will require another 178 million PLN.

These investments by the Port of Gdansk Authority, despite amounting to the considerable sum of nearly 1 billion PLN, are just the beginning. Another 7 billion PLN what will be added over the next five years by companies operating in the areas of port, such as PERN currently undertaking the construction of the oil terminal, DCTGdansk SA which is expanding the container terminal. Gdanskie Zaklady Nawozow Fosforowych Fosfory Sp. z o.o. are also planning to invest nearly 100 million PLN in the port. It is also worth recalling at this point that the PAGO company is also building some cold storage facilities. The OT Logistics company is constructing a deepwaterterminal – only a week ago they signed a preliminary agreement with the port authority in this regard. If we add to this the ever expanding Pomeranian Logistics Centre, whose value is estimated at1 billion PLN, or investment projects in access infrastructure, including the recently described modernization of the 226 railway line along with the construction of a railway bridge over the Dead Vistula, it can be stated that at present the Port of Gdansk is one of the most frequently mentioned areas in the context of the largest and most important infrastructure investments in the region.

To summarize, for the first time in the Port of Gdansk’s over 1,000-year history, the next few years will see the accumulation of infrastructure investment affecting all modes of transport crossing the Port of Gdansk – the country’s largest logistics hub. The whole of the planned investment is a response to the challenges posed bya growing market demand for maritime transport in the Baltic. As expected, the Port of Gdansk over the next few years could even witness a tripling of the annual volume of cargo. Accordingly, it is necessary to carry out this investment program that will soon completely transform the port we know at the moment. The almost 8 billion PLN to be invested over the next 5 years in infrastructure will undoubtedly influence the final form of the port – an area that is set to become a powerful, modern and competitive Europe distribution centre reloading, the initial link in the Baltic-Adriatic corridor, which will be the logistical locomotive not only of this region, but the entire country.

The Port of Gdansk, aware of the huge potential and interest in Gdansk, in the port development strategy for 2027 also took into account some further multibillion-dollar initiatives. One of them is an extended development of the port by silting the waters of the Gulf of Gdansk. The new investment called Outer or Central Port is a project set to begin after 2020, thus opening up a new operational phase as a port of theV generation – safe, modern, competitive and constituting one of the most important sources of Polish Gross Domestic Product.