Port deepening to begin next month 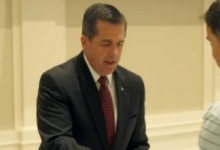 By Tim Rausch, The Augusta Chronicle

While the deepening project has been underway for months, the actual dredging to make it deeper will begin soon.

Curtis Foltz, the Executive Director of the Georgia Ports Authority, said Thursday that the first major dredging contract was awarded this week, $130 million. The said dredging the outer portion of the 39-mile channel shoud begin in September, three months sooner than expected.