Pipes and Pump at the Ready, Menemsha Harbor Dredging Set to Begin 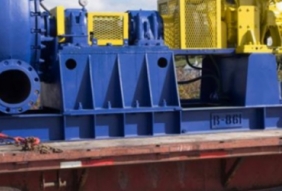 Three years after Hurricane Sandy struck the Island, flooding roadways and leaving much of Menemsha underwater, the Army Corps of Engineers is preparing to dredge Menemsha Channel. It will be the channel’s first dredging in more than 40 years.

On Monday morning, a trailer load of pipes, along with a large hydraulic pump and other equipment, sat ready on the Aquinnah side of Menemsha Channel. Once assembled, the floating dredge will begin pumping about 65,000 cubic yards of sand onto Lobsterville Beach in Aquinnah.

“We lost a considerable amount of property which was protecting Lobsterville Road,” said Bret Stearns, director of natural resources for the Wampanoag Tribe of Gay Head (Aquinnah), recalling the effects of Hurricane Sandy, which hit the region three years ago this Thursday.

Using federal emergency relief funds allocated for storm repairs, the Army Corps plans to clear a channel eight feet deep (10 feet at the entrance), extending about a third of the way through Menemsha Pond. The federally constructed channel was last dredged in 1973.

The dredged material will be pumped through a pipeline along Lobsterville Road to the dunes on tribal property, where earth-moving equipment will push it into place. The tribe has already reinforced the area with stones, and hopes to replant it with beach grass and shrubbery in the spring.

Army Corps project manager Chris Martin expected the dredge to arrive from New Bedford within the next two weeks.

To avoid interfering with piping plovers, shellfish and other species, the earliest start date was Oct. 1., but Hurricane Joaquin delayed the project. In addition, Menemsha and Lobsterville were hotspots in the annual Martha’s Vineyard Striped Bass and Bluefish Derby, which ended Oct. 17. Contractor J-Way Southern Inc. of Avon, Ohio, had hoped to start sooner, Mr. Martin said, but “the fact that they are not dredging has actually worked out better.”

Workers now have until Jan. 31 to complete the project before winter flounder begin spawning. Other environmental concerns have come into play as well.

The $2.17 million project will have to avoid the anchorages in Menemsha Harbor in Chilmark, where a survey revealed an abundance of eelgrass, an aquatic plant that supports shellfish and other species. A follow-up survey will take place within a year of the project’s completion.

“Normally we would just remove eelgrass in our channels,” Mr. Martin said. “But in this case it was determined that it was not a regular enough routine to be considered a [typical] project.” He added that the cost of mitigating the loss of eelgrass would have far exceeded the cost of dredging.

In response to the eelgrass concerns, and the contractor’s earlier plan to dredge along the southern edge of the harbor, the Chilmark selectmen passed a resolution in August to prohibit dredging in the harbor for the 2015-2016 season. The Chilmark selectmen have long opposed dredging the channel too, citing concerns over shellfish and a potential increase in boat traffic. They planned to meet with Aquinnah selectmen to draw up new regulations to limit boat traffic in the pond and channel, and will ask voters in November to approve $6,000 for a small boat to help patrol the waterway.

Mr. Stearns noted that the dredging would be limited to the federal channel, and that town regulations protecting the pond would remain in place.

Leaders in Aquinnah say the project will improve the situation for mariners, and possibly for shellfish. Some believe the dredging will bring more nutrients into the pond and improve flushing, but Mr. Stearns cited a 2014 study by the Woods Hole Group which found that the hydrodynamic changes would have little or no effect on shellfish.

“Some years are great, some years aren’t so great,” Mr. Stearns said of the scallop harvests in Aquinnah. “I don’t know that we are going to see a considerable change in that pattern.”

Mr. Martin agreed that the effect on shellfish would be minimal, but noted a likely increase in boat traffic. “Generally in situations like this, when the project hasn’t been done for many years or decades, there is some interest in the public to go places they haven’t been in the past,” he said. But he added that the interest tends to fade over time.

Circulation patterns will remain about the same after the dredging, according to the 2014 report. But the rate of flow will likely decrease by about 30 per cent over the eastern flats, and a counter-clockwise eddy may form to the south of that area for short periods, in addition to the larger clockwise motion of the pond. The flow at the head of the channel will likely increase, but by less than a foot per second.

The Woods Hole Group noted that the reduced velocity in the eastern flats could actually benefit shellfish by giving them more time to attach to the stalks of eelgrass as juveniles – a key phase in their life cycle.

The channel has become severely shoaled, the report states, and although the pond is well-flushed, continued shoaling could impede circulation in the future. Workers plan to remove more than twice the amount of material that was removed in 1973.

“The opportunity to dredge may not become available again for a long time even if conditions deteriorate in the pond,” the report adds.

Of the $48 billion in emergency relief funds that Congress approved after Hurricane Sandy, about $5.08 billion went to the Army Corps of Engineers.