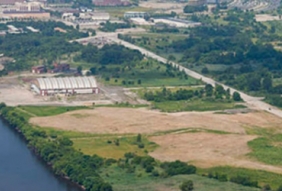 With the Delaware River dredging and the widening of the Panama Canal nearing completion, talks of expanding the Philadelphia Port are picking up steam and Democratic mayoral candidate Jim Kenney is going with it.

At event after event, Kenney has been beating the drum on how the port expansion could bring thousands of working-class jobs to Philadelphia.

“That’s a way we can address our 26 percent poverty rate,” Kenney said Tuesday at the first mayoral debate of the general election campaign.

His port-job creation plan is focused on the expansion of the Packer Avenue Marine Terminal and developing 200 acres called Southport, at the Navy Yard’s eastern end.

Kenney, who will likely be the next mayor given the overwhelming number of Democrats in the city, called the port expansion “the most realistic and most lucrative” job creation plan at the moment. He said last week that he is working with the Philadelphia Regional Port Authority (PRPA) and Gov. Wolf’s office on a plan that could create from 8,000 to 10,000 jobs.

The city’s contribution would be building roads and perhaps training facilities so that port operators can expand.

Melissa Murray Bailey, the Republican mayoral candidate, was less enthusiastic. She said that she had not seen enough evidence that developing the port would create jobs.

“Our port does not have quick and easy access to the open ocean, which is a big consideration for large container ships,” Bailey said, adding that she would rather focus on natural gas and petrochemical manufacturing for job creation.

His first step, Kenney said Wednesday, would be to find another site for 150,000 Hyundai and Kia cars that come by ship annually from South Korea and are kept in lots in and near the Packer Avenue terminal in South Philadelphia.

“The Holts think they can go from 450,000 to 800,000 [containers] with land just around them. That doesn’t include the potential for Southport,” Kenney said.

An engineering study, commissioned by Holt Logistics, which operates the Packer terminal, and the PRPA last year, found that if the Packer terminal were “modernized,” the facility could process up to 800,000 containers – “essentially doubling the containers that are put through there today,” said James T. McDermott Jr., executive director of the PRPA, which owns the privately run Packer Avenue terminal and the land for the proposed Southport.

Recommended upgrades include new container cranes, electrification of the terminal, repairs to the facility’s seawall, and paving to allow additional stacking of containers, McDermott said.

“For a $100 million investment, we’d be able to handle the biggest ships in the world at Packer,” said Tom Holt Jr., chairman of Holt Logistics. “We’ve doubled the volume of containers in the last six or seven years at Packer, and we’re on a trend to do it again. The need is there today. We are desperate for more acreage.”

Holt owns 50 acres, known as the former Publicker Industries site, adjacent to the Packer terminal and used now to park cars arriving on ships before they are prepped for dealer showrooms.

That land could be used for containers, but the cars must go somewhere. In the short term, Holt suggested they be parked on vacant land at Southport.

“We’ve been pushing for a master plan for the port, which would put the different cargoes in the most efficient and best spaces,” Holt said. “Let’s accommodate the cars, so we can grow the jobs. That will allow us to accommodate more containers. But the planning has to be done jointly, with all the different constituents involved.”

The state, which owns piers and terminals on the Delaware River in the city, including Packer Avenue, is now looking for one or more maritime businesses to develop Southport.

City taxpayers would pay for road upgrades, according to Kenney’s plan. “We would fund street, surface street, sidewalk curb infrastructure,” he said. “The rest would be private investment.”

City improvements would be paid through the capital and Streets Department budgets. “Why would the city not pay for an opportunity to bring 10,000, 15,000, 20,000 jobs?” said Kenney, though he says he doesn’t have a cost estimate yet.

The idea for Southport is not new. The PRPA sought development bids in 2009, but the rocky economy stalled the project. In 2010, with an uptick in shipping and the Delaware River channel deepening from 40 feet to 45 feet, Southport appeared to have new life.

With new leadership in Harrisburg, Gov. Wolf appointed a new PRPA chairman, Gerard Sweeney, and several new board members. The agency in September asked interested parties to submit “qualifications” to develop Southport. It hopes the project will be underway by 2017.

“The right pieces need to be in place to enable that to happen,” said Alan Greenberger, deputy mayor for economic development. “I think [Kenney] is correct that we are getting close to that moment.”