Panama Canal to limit ship draft due to drought 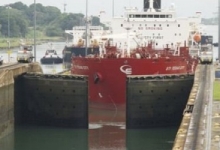 The Panama Canal Authority says it will temporarily cut the draft of ships allowed through because of drought caused by El Nino.

A similar restriction was imposed for the same reason in 1998.

The authorities say a further cut could be imposed on 16 September if the situation does not improve.

The authority has taken the action because water levels in the Gatun and Alhajuela lakes have fallen as a result of the El Nino weather phenomenon.

Shipping companies had been warned the cuts could be coming.

The Panama Canal celebrated its 100th anniversary last year, having seen more than a million ships pass through.

Panama took control of the canal from the US in 2000, and has since been widely praised with the way it has handled the operation.

Transit fees now bring in about $1bn (£645m) a year for the government.

Great Lakes Dredge & Dock Co. has announced that the dredges Ellis Island and Liberty Island have made significant progress over this past week. As of yesterday morning (Wednesday, August 10, 2022) over 90 percent of the total contract volume (1.2 million cubic yards of sand) has been placed in the Buxton beach nourishment project area, and the project… Read More

Painstaking restoration of presidential yacht will soon begin in Belfast

Those who stroll along the Belfast waterfront likely walk right by a National Historic Landmark without ever knowing it. That’s because the USS Sequoia, a 1925 motor yacht that served as the so-called Floating White House for eight presidents, is being stored under white plastic in a city-owned parking lot adjacent to the Belfast Harbor Walk. The… Read More

After commissioning a Dutch company to build a custom superyacht, Amazon founder Jeff Bezos encountered major opposition when the plans included temporarily dismantling a historic bridge to allow the vessel to sail out of the harbor. The half-billion dollar yacht, designed to be the largest in the world at 417 feet, would have been too… Read More

Great Lakes Dredge & Dock Co. has announced that the dredges Ellis Island and Liberty Island have made significant progress over this past week. As of Aug. 10, over 90 percent of the total contract volume (1.2 million cubic yards of sand) has been placed in the Buxton beach nourishment project area, and the project is expected to be… Read More